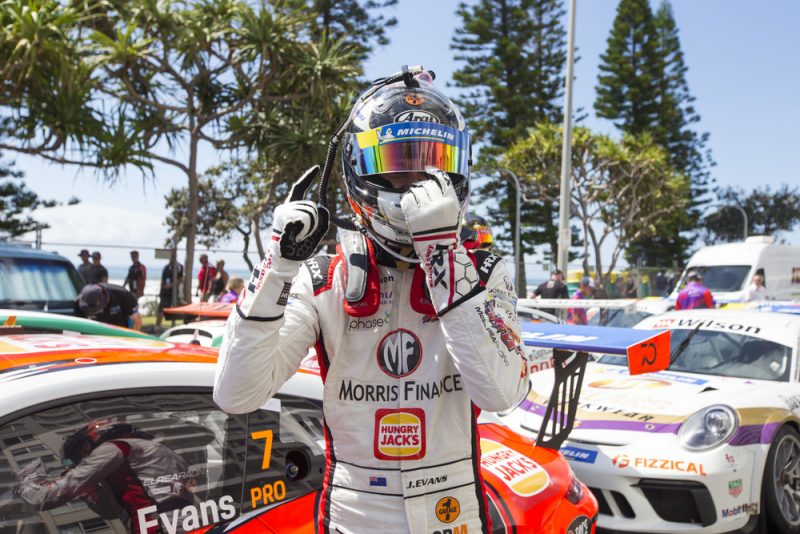 Jaxon Evans has taken an opportunistic victory to close out the Porsche Wilson Security Carrera Cup Australia season on the Gold Coast in style.

The Kiwi driver sliced past Earl Bamber and Nick McBride at the start and held off the Porsche factory pilot for the win.

McBride covered Bamber off on the run down to Turn 1, but the New Zealander dived down the inside at Turn 4, locking the rears and allowing Evans to scoot past.

Evans managed to out-drag Bamber and move ahead before the Beach Chicane and led the opening lap despite Bamber having a second attempt at the lead sideways under the brakes for Turn 11.

McBride then found himself second as Bamber dropped a position to third in the final sector of Lap 2.

Glen Wood and Jordan Love battled hard in the mid-pack; running door to door on the run to the Beach Chicane when a minor touch left the latter all crossed up at high speed.

Graham Williams and Indiran Padayachee got into each other at Turn 4 as Williams covered his line under braking.

It forced Padayachee to make heavy contact with the inside concrete wall, bringing out the Safety Car.

The race would not restart, leaving Evans to lead the field under yellow to the chequered flag.

McBride’s second place finish secured him the round win, ahead of Bamber in third.