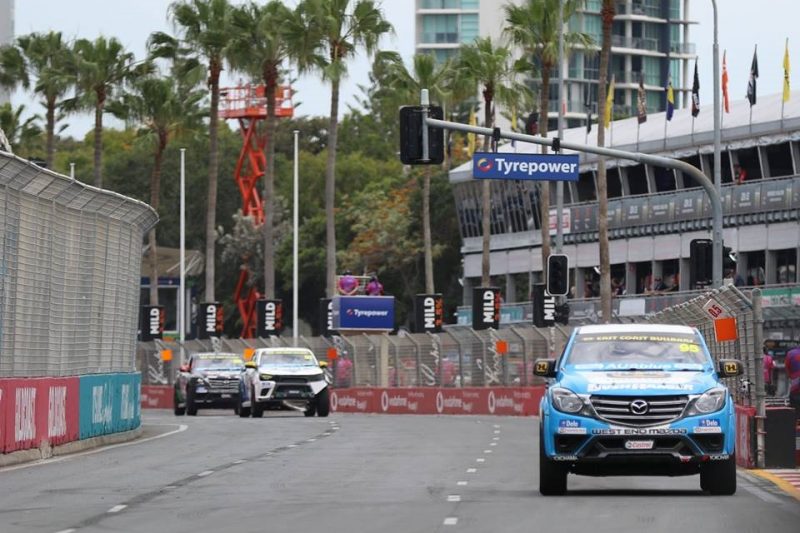 Aaron Cameron has taken his first win in the ECB SuperUtes Series as the Peters Motorsport Mazdas went one-two in Race 2 on the Gold Coast.

Cameron started third with the top nine grid reversal and overtook Christopher Formosa (#49 Ranger Racing Ford Ranger) to move into second at the start of Lap 2.

He got under Matt MacKelden (#99 Sieders Racing Team Toyota Hilux) at Breaker Street later that lap and never looked back.

Race 1 winner Ryal Harris was his typically aggressive self as he pulled off a number of deep under brakes passes in the early laps.

He moved into second position by overtaking Luke van Herwaarde (#52 Western Sydney Motorsport Toyota Hilux) at the Hairpin on Lap 4.

However, his team-mate was already well up the road and the margin in fact increased as the race wore on until 6.4s separated the #95 BT-50 from the trailing #58 BT-50 at the chequered flag.

Woods had a number of nervous moments at Turn 11 in particular during the eight-lap race but survived them.

Tom Alexander was seventh in the #22 Ross Stone Racing Holden Colorado and Mick Sieders eighth after being sidelined from Race 1 with what ultimately went back to a wiring problem in the #45 Sieders Racing Team Mitsubishi Triton following its rebuild.

Kim Jane is out for the weekend due to an engine problem in the #1 Steve Wilson Racing Isuzu D-Max.