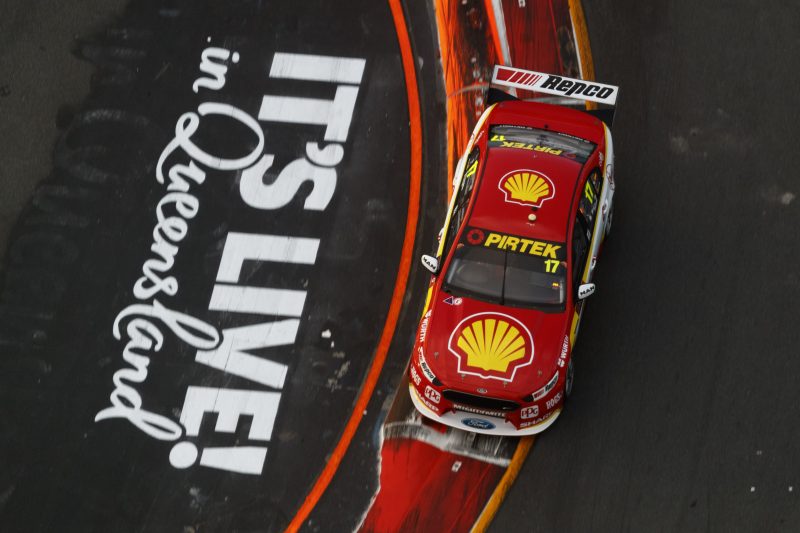 Scott McLaughlin has taken the lead in the Supercars Championship

Scott McLaughlin admitted he is lucky to have assumed the championship lead after thinking his day was ‘done’ when his car found the wall early in Race 26.

The Shell V-Power Racing driver managed to bring a wounded Falcon home in fifth as title rival Shane van Gisbergen hit trouble, resulting in a 33 point swing in the championship.

However, it wasn’t plain sailing as McLaughlin was a nervous onlooker when co-driver Alexandre Premat slapped the wall at Turn 12 on lap 2 after contact from Paul Dumbrell (Red Bull Holden Racing Team) in what was viewed by stewards as a racing incident.

Dumbrell dived underneath race leader Premat who subsequently dropped to fifth after the rear of the #17 car found the wall.

McLaughlin feared the worst watching the impact from the garage and admitted the car ‘didn’t feel right’ when he took over from Premat.

The 25-year-old powered on and now leads the series by 14 points after van Gisbergen could only finish 10th, when a pit lane penalty for an unsafe release dashed his hopes.

“For the car being in the wall, I thought we were done so it’s nice to get a good finish and finish in front of them (Triple Eight) another time,” McLaughlin told Speedcafe.com.

“It was a racing incident I think. I don’t really see anything (in it), but it’s just unfortunate.

“For some reason my right handers (corners) were a lot better than my left handers,” he added when talking of the damage to the car.

“You just have to think that it’s something that might be bent in some way.

“End of the day, we’ll look at it tonight, put it on the flat patch and we’ll find out in about half an hour if I’m true or if I’m talking rubbish and move on.

“It’s a turnaround (in the championship) absolutely.

“At the end of the day we got points, we keep getting more points than them.

“I probably thought at the end of the race there, when I got in the car, I thought we might be able to make a fair bit of points today but we made some, and we’ll just try and keep on chipping away.”

McLaughlin’s race was helped by strategy as Shell V-Power Racing compromised the race for the team’s sister car driven by Fabian Coulthard and Tony D’Alberto to help the #17 entry.

The squad elected to short-fill the #12 car at the first round of pit stops under the Safety Car to save the McLaughlin and Premat car from double stacking in pit lane and losing valuable time.

It is a move that has been acknowledged by the new championship leader.

“It could have gone either way and have to thank the #12 guys because it (the short-fill) kind of screwed their race,” added McLaughlin.

“They were in a really good position and just playing the team game.

“I’ve got to thank the #12 guys for doing that. We came out of it a lot better but I guess in some ways that’s what we need to do for the championship as a team, but it does suck for Fabian and Tony’s race.”

Team managing director Ryan Story says the decision was done for the betterment of the outfit with McLaughlin locked in the title fight.

“We made the call that would best benefit the team overall, and our guys understand that,” Story told Speedcafe.com.

“It’s a cultural mentality that comes from the very top of our organisation with Roger (Penske) and how the Penske team operates across the board.

“It’s very important to us and when the team wins we all win. That’s our approach.”

The Vodafone Gold Coast 600 concludes on Sunday with a 300km race which is scheduled for 1425 local time.