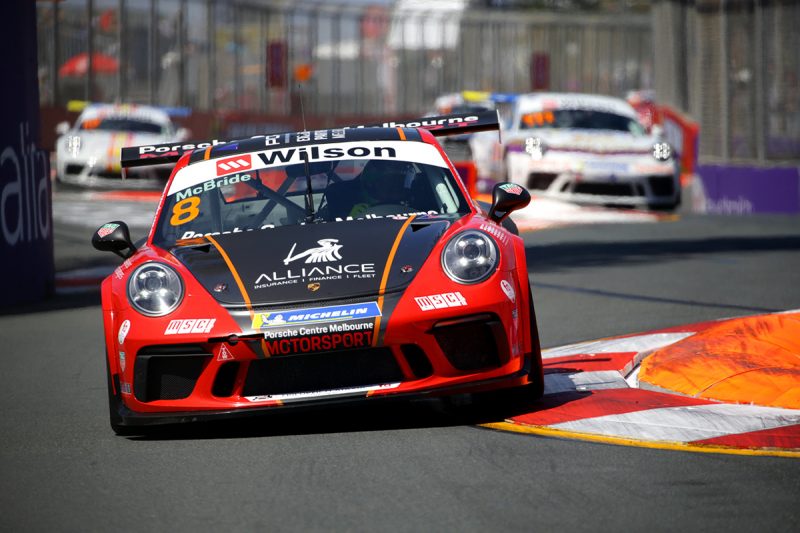 Nick McBride held off David Wall for victory in Race 1 for the Porsche Wilson Security Carrera Cup Australia Series on the Gold Coast in which multiple championships were decided.

Jaxon Evans came home fourth, which was enough for him to assume an unassailable lead in the championship standings after a rough encounter for title rival Dylan O’Keeffe.

McBride made a critical move for the lead on Lap 11 at Turn 11 after then front man Wall cut through the Beach Chicane allowing the former to pounce.

From there, McBride held strong at the front, surviving a late Safety Car restart to earn his first win of the season.

Wall’s second place finish secured him the outright Endurance Cup title in what was the final race for that sub-championship.

A superb drive from Earl Bamber saw the New Zealander claim third spot ahead of new champion Evans and Dale Wood in fifth.

Wall launched well off pole position and led an unchanged top four on the opening lap as O’Keeffe’s championship hopes were all but extinguished after a problematic start.

The Victorian, who entered the weekend second in the standings, was forced to retire from the race after a series of brushes with the wall which were followed by a significant hit to the right side of the car at Turn 12.

Bamber, who started from fourth, passed Evans for third at Turn 11 on Lap 10, as the latter then fell into the clutches of Jordan Love and was ultimately passed.

Following that, Bamber began to close in on Wall for second place, but the Safety Car was deployed on Lap 22 when Love found the fence.

The West Australian’s Sonic entry was sideways at the last part of the Beach Chicane, clouting the tyre barrier with the rear of the car and coming to a halt in the wrong direction.

McBride led the field back to green on Lap 27 and retained it despite a near miss with the wall at the Front Chicane on the restart.

Wall was unable to make a move and McBride managed to absorb the pressure through the closing stages to secure the victory.

Adrian Flack completed the top 10 and was the best placed Pro-Am runner.

The Carrera Cup Australia field will return to the track for Race 2 at 13:15 local time.