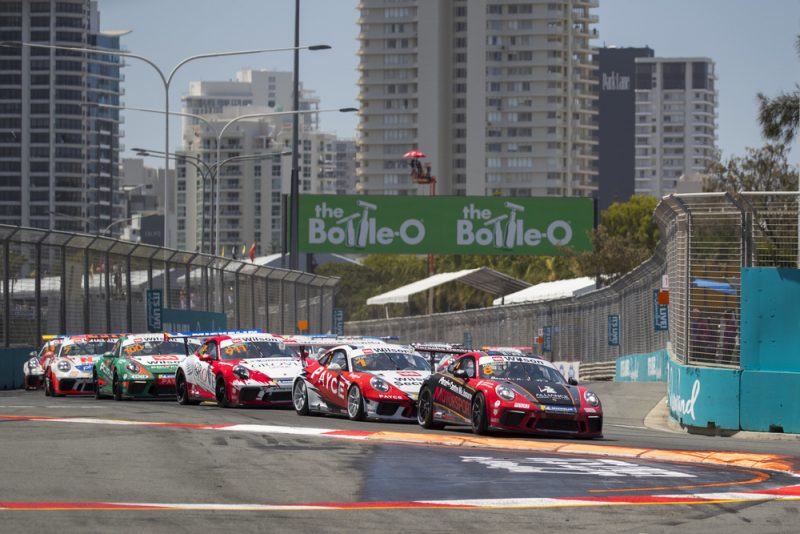 Nick McBride leads the field at the start of Race 2

Nick McBride claimed victory in the second race of the weekend for Porsche Wilson Security Carrera Cup Australia on the Gold Coast after holding off Earl Bamber.

After getting away cleanly at the start, McBride set off up the road but quickly fell in the crosshairs of Bamber who sliced up the inside of David Wall for second at Turn 11 on the opening lap.

The top two traded fastest laps for much of the 12-lap encounter, with McBride setting a new lap record (1:12.288s) in the process.

Bamber was unable to get by for the lead, as McBride held firm up front to earn his second win of the season.

Cameron Hill’s race came to end early after he hit the wall and damaged the front right of his car while running in the top 10.

Dylan O’Keeffe was also in strife after starting from the rear of the grid due to his Race 1 retirement, getting into Peter Major at Turn 4 and turning him around.

James Moffat cleared Glen Wood for sixth with a move at Turn 4 on Lap 9 after the pair had run nose-to-tail since the start.

Champion-elect Jaxon Evans managed to reel in Wall for third, but couldn’t find a way past in the closing stages of the race.

In the end, Bamber crossed the line 0.8s behind victor McBride as Wall, Evans and Moffat rounded out the top five.

Dale Wood took the chequered flag in sixth spot, while Jordan Love recovered to seventh from Adam Garwood and Adrian Flack who took out the Pro-Am honours.

Carrera Cup Australia will be back out on track for its final race of the season on Sunday at 1305 local time.