Lorenzo in doubt for Australian MotoGP

Lorenzo in doubt for Australian MotoGP 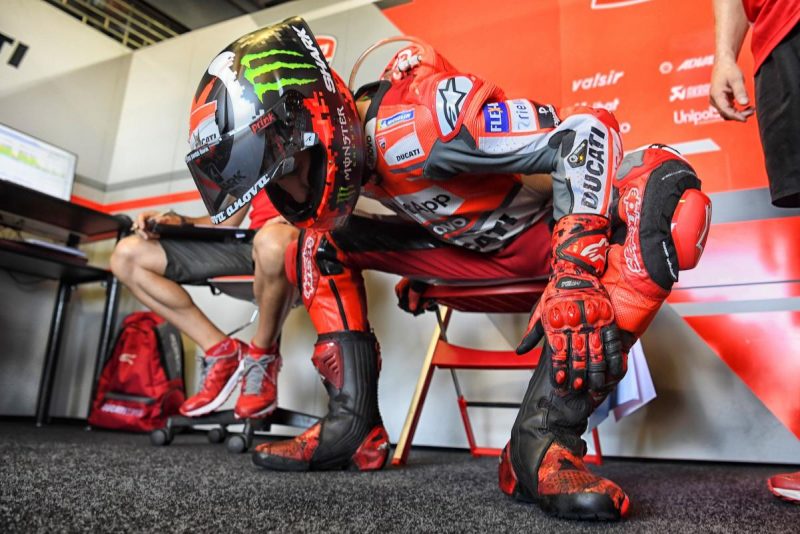 Jorge Lorenzo is in doubt for next weekend’s Michelin Australian Motorcycle Grand Prix after withdrawing from a second round in succession in Japan.

Lorenzo pulled out of this weekend’s round at Twin Ring Motegi after a two-lap run at the start of Free Practice 1.

The Spaniard also sat out the Thai MotoGP a fortnight earlier after being thrown off his Ducati due to a mechanical problem during practice.

Having dislocated a toe and fractured a metatarsal on his right foot in a first-corner crash at Aragon, it was initially believed that Lorenzo escaped the frightening Buriram crash with bruising.

The diagnosis was revised later that day to a hairline fracture in his left radius, and subsequently a full fracture.

“I don’t know about Phillip Island yet, because you never know what can you feel when I arrive there on Wednesday or Thursday,” said Lorenzo.

“But it’s difficult to believe, if in 14 days (from Thailand to Japan) the injury didn’t recover so well, that in six days it could recover so fast.

“It can happen and we are going to make a magnetic resonance (MRI) to understand even more closely what happened in all the injury and decide what to do, the only thing I will do now is rest, and wait for the body to recover.”

Ducati Sporting Director Paolo Ciabatti told MotoGP’s world feed television broadcast shortly after Lorenzo had stepped off the bike that his pain had flared up when he stepped up his training.

“He has felt better during the two weeks of rest, but in the last days, he has intensified the training and has more pain,” Ciabatti explained.

“We did the tests again and we have seen that the fracture has not healed.”

Lorenzo himself conceded that he may have pushed too hard, too soon in his attempt to recover.

“This maybe, I think, didn’t make worse the injury but maybe slowed down the recovery.

“I feel even worse than expected; I expected a lot of difficulties to ride but I feel very bad on braking because the body, the brain didn’t allow me to push the left wrist in the braking so I wasn’t quick.

“Obviously I wasn’t comfortable, (but) even if I felt safe on the bike, feeling if I wanted to push a little bit more, I could make a mistake and crash.

“It has no meaning (to race) like this, because on this track I could have my options to fight for the win (if fit).”

Andrea Dovizioso led the way in FP1 on the other Ducati Team entry, before FP2 was affected by damp conditions.