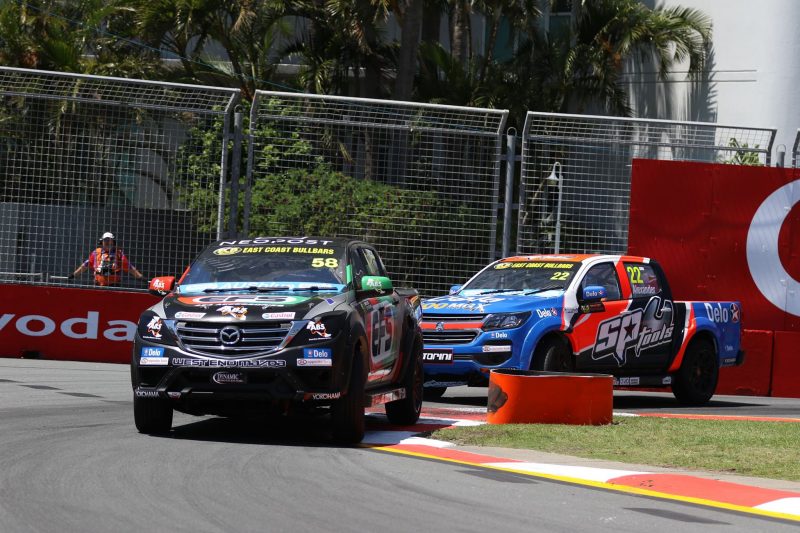 The Ryal Harris hot streak has rolled on with a lights-to-flag win in Race 1 of Round 7 of the ECB SuperUtes Series on the Gold Coast.

Harris, who swept the previous round at Bathurst to reclaim the series lead, led the field into the first corner and the #58 Peters Motorsport Mazda BT-50 was never headed.

Tom Alexander ran second for the duration and at one stage pegged the gap back from over a second to around five tenths, but never made a serious challenge in the #22 Ross Stone Racing Holden Colorado.

Luke van Herwaarde ran fourth until he made a big lunge at Woods on Lap 3 which saw him glance the wall entering Breaker Street.

The #52 WSM Hilux, which still sported the scars of a crash in Armor All Qualifying the afternoon prior, finished sixth.

Aaron Cameron struggled with an apparent electrical issue in the #95 Peters BT-50 which hampered his ability to achieve full throttle and the new KZ2 karting champion finished seventh.

Mick Sieders, whose #45 SRT Triton was set to take to the track with parts borrowed from a Mitsubishi executive’s company car after a qualifying hit, was a non-starter in the end.

Kim Jane and the #1 Steve Wilson Racing Isuzu D-Max did not appear for the race.