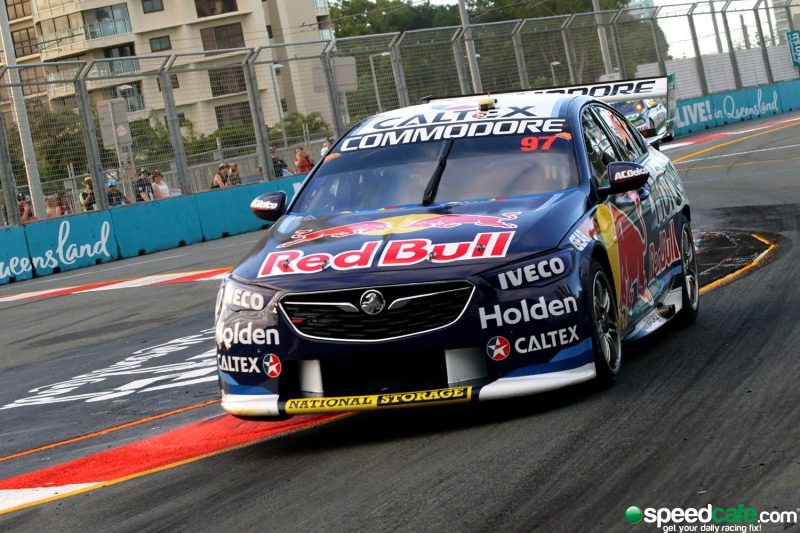 Shane van Gisbergen has set the fastest lap in Friday practice for the Vodafone Gold Coast 600 as Will Davison went hard into the wall with an apparent steering failure. 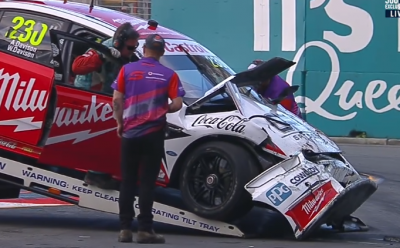 The damage on the 23Red Falcon pic: Fox Sports

The session was marred by a sizeable shunt for Davison, who clouted the wall at the Front Chicane in the #230 Milwaukee FGX Falcon.

He had just touched the tyre bundle on the way into the chicane but it appeared that the upper steering arm failed when the 23Red Ford landed.

Davison ran headlong into the tyre wall as a result with the impact shifting the concrete wall behind the tyres.

“I lost all steering,” he reported from pit lane later in the session.

“I went into the first chicane and heard a big knock.”

Whincup had been on top at the time of the resulting red flag, which came in the seventh minute, with a 1:10.9197s.

It took around 10 minutes after the resumption for McLaughlin to knock that time off, before they exchanged top spot two more times.

Van Gisbergen threw his hat in the ring by lowering the benchmark to 1:10.3513s with five minutes remaining, only for McLaughlin to knock another tenth off that in the final minute.

Car #17 was therefore fastest when the chequered flag came out, but van Gisbergen found more pace to set a 1:10.0763s.

Lee Holdsworth in the #18 Preston Hire Racing ZB Commodore was best outside the Triple Eight/DJRTP quintet.

Waters ended the session with the left-front guard peeling away after he swiped the tyre bundle exiting the Front Chicane at least four times.

Riche Stanaway crabbed back to the pits in the #56 Rabble.Club FGX Falcon having fired into the fence on driver’s right on his way out of the same complex, perhaps have been trapped by water unsettled from the tyre bundles by Davison’s crash.