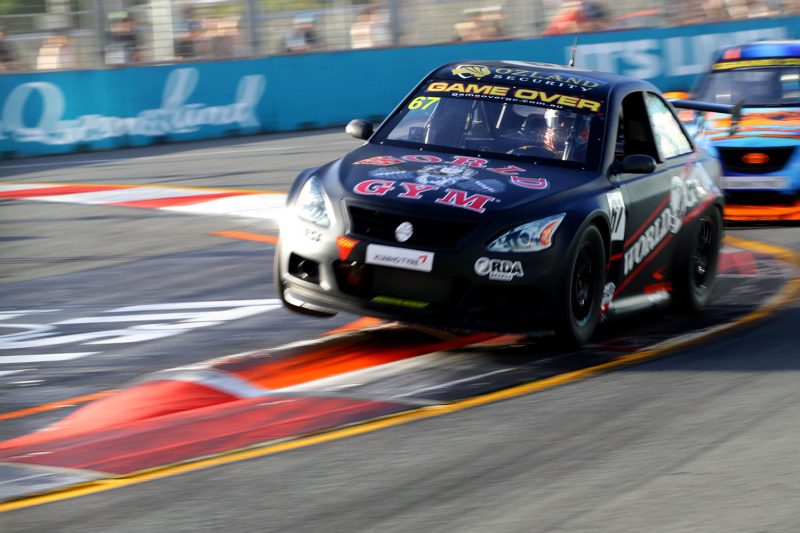 Paul Morris won the opening race of the final round of the Aussie Racing Cars Series at the Vodafone Gold Coast 600.

Morris started from third on the grid but got to the front with two under brakes moves into the Front Chicane, before a Safety Car set up a single-lap dash to the chequered flag.

Series contender Kel Treseder had nabbed pole position with the final flyer of the day’s earlier qualifying session and made a good launch to lead the 30-car field into the opening corners.

However, he looked to have been surprised by a move from Joel Heinrich into Turn 1 at the start of the next lap, and succumbed to a similar pass from Morris a lap later.

‘The Dude’ was in front with a big dive past Heinrich at the start of Lap 4, just as it became apparent that Treseder had a mechanical issue which soon saw him pull off.

Keelan Dunston locked up and ran into the tyre wall entering the main straight on Lap 7 and was cleaned up by an unlucky Pawel Faber.

Moments later, Grant Thompson veered into the wall just past the scene of the first incident with a steering arm failure, before the Safety Car was called for the Dunston-Faber crash.

Morris was comfortable enough in holding his lead in the final green flag lap which remained as Heinrich, who trails series leader Kyle Ensbey by a point, took second.

Ensbey was fourth, behind Blake Sciberras. 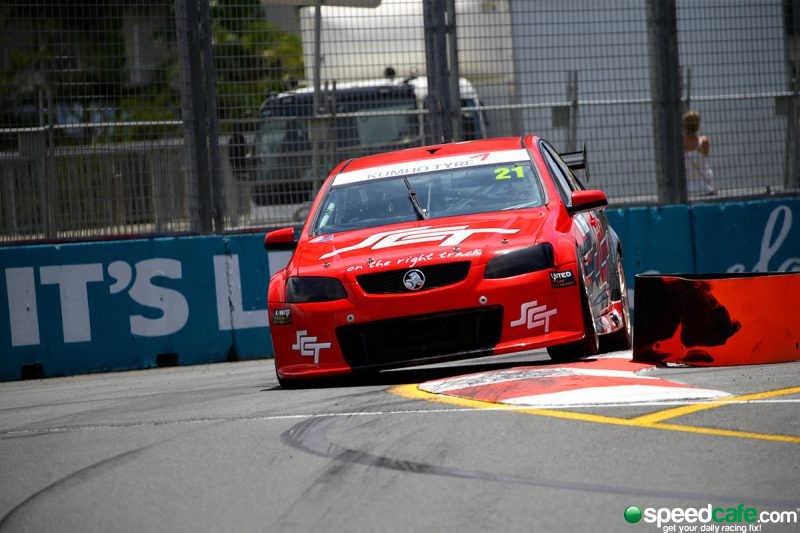 Setting a 1:14.7447s just before a red flag period in Practice 2, Smith moved more than half a second clear of Tyler Everingham.

Smith and Everingham had traded fastest times in the opening 20 minute practice session in the series’ first ever appearance on the Gold Coast street circuit.

It was a session that saw drivers exploring the limits and, more than once, overstepping as multiple drivers ended up in escape roads or cutting through chicanes.

Jon McCorkindale’s Falcon was forced to stop as it starting blowing smoke in Practice 1, while Chris Smerdon brushed the wall at the first chicane.

Smerdon’s incident left a puddle of water on the apex of Turn 3, which subsequently caught out Michael Anderson, who avoided disaster to lightly scrape the wall as the session drew to a close after spinning on the slippery surface.

Later in the day Smerdon found the same tyre bundle, burying the nose into the tyres and drawing a red flag midway through Practice 2.

McCorkindale’s second session proved no improvement over the first, heading straight back into the lane at the start of second practice with a loose right rear wheel.

Third for the day went to Kyle Austin, who was nearly three seconds off the pace of Smith but improved from sixth in the opening session.

The V8 Touring Car Series returns to the Surfers Paradise circuit at 0805 on Saturday morning for a 20 minute qualifying session, followed by Race 1 at 1050.