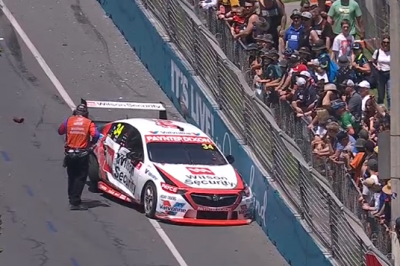 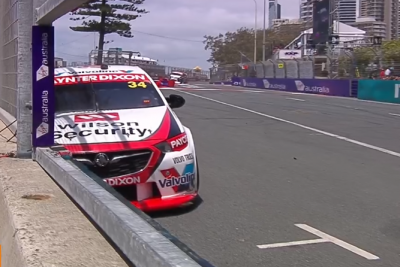 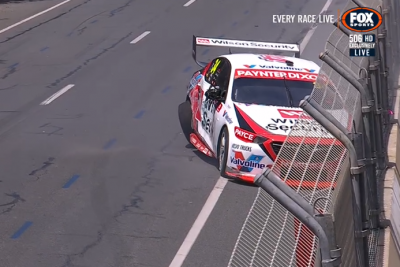 Rick Kelly has clocked the fastest lap in Practice 1 for the Vodafone Gold Coast 600, which ended slightly early when James Golding clouted the wall.

Kelly moved from outside the top 10 to take over the lead with just over five minutes of the half-hour session remaining, and that time of 1:11.3245s stood up against the efforts which followed.

A red flag was called with just over 30 seconds left as a result of Golding’s error at the Beach Chicane.

The rookie got his line slightly wrong through the middle of the complex and ultimately hit the wall on both sides in the #34 Wilson Security ZB Commodore.

The right-rear and left-front corners appeared to bear the brunt of the impacts as Golding ricocheted between the concrete.

Kelly was therefore locked into first position in the #15 Castrol Nissan Altima from Craig Lowndes and Scott Pye.

“We had a bit of a quicker car there but McLaughlin’s team-mate was, I don’t know, warming up, whatever, and got in the way a little bit in that last sector so it cost us a little bit,” reported Kelly.

“It’s challenging out there, you obviously see the damage on the GRM car and everyone’s sort of scraping walls to get a time and that’s what this place is about so I guess that’s why the drivers enjoy it so much.”

Lowndes was a late mover from the bottom half of the field to close to 0.1107s off the pace in the #888 Autobarn ZB Commodore, while Warren Luff finished the session in Pye’s #2 Boost Mobile ZB Commodore.

While Golding’s was the only major hit, he was not the only driver to put marks on their cars.

Whincup bumped the wall at Breaker Street (Turn 11), Richie Stanaway twice wagged the tail of the #56 Rabble.Club FGX Falcon into the same wall, and Chaz Mostert scraped the side of the #55 Supercheap Auto FGX Falcon at the Front Chicane.

The latter was still fastest of the Tickford drivers in 14th, one position behind Fabian Coulthard in the #12 DJR Team Penske FGX Falcon.

Pye and Anton De Pasquale (#99 Erebus ZB Commodore) both got away with big sideways moments off the Beach Chicane and Front Chicane respectively.