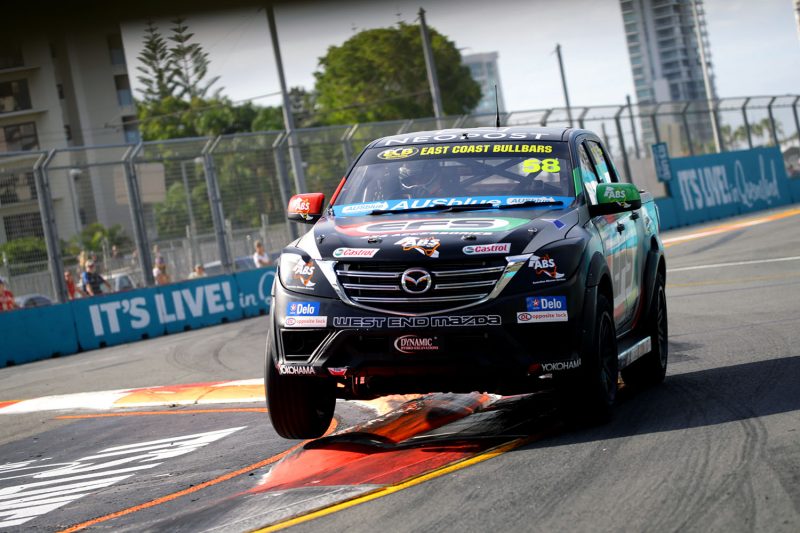 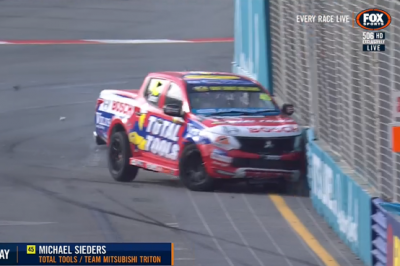 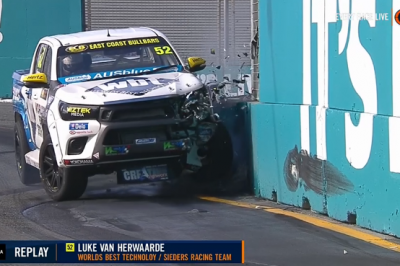 Ryal Harris has kept up his form in Armor All Qualifying for the ECB SuperUtes Series as two drivers came to grief in a significant way in Surfers Paradise.

Mick Sieders and debutant Luke van Herwaarde both made sizeable contact with the barriers at the Front Chicane and ended the session parked on the approach to the Hairpin.

Sieders glanced the tyre belt on exit, which broke a steering arm and turned the #45 Sieders Racing Team Mitsubishi Triton back into the concrete wall.

Van Herwaarde, on debut in an SRT-prepared Western Sydney Motorsport entry, smashed the #52 Toyota Hilux into the tyre bundle after making a mess of his entry to the chicane.

The 18-year-old had already got away with one moment when he swiped the tyre wall exiting the Beach Chicane.

Harris had no such trouble in his Peters Motorsport Mazda BT-50, going three from three after also being fastest in both practice sessions.

His pace was 0.2s away from Practice 2 but the series leader was still nearly a quarter of a second faster than Tom Alexander in the Ross Stone Racing Holden Colorado, who will also line up on the front row.

Van Herwaarde’s mistake came right at the end of the session and he therefore escaped a red flag and kept the lap time which puts him third on the starting grid, alongside team-mate Craig Woods in another Hilux.

The session had also remained green when Mick Sieders pulled up in his wounded Triton and he will start sixth, next to Aaron Cameron (Peters BT-50).