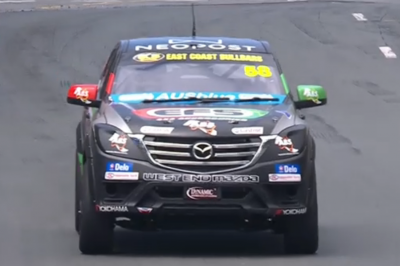 Ryal Harris has maintained his status as pace-setter in SuperUtes by topping second practice on the Gold Coast.

The margin from first to second was not quite as great as in Practice 1, when Harris was more than a second faster than the rest, but he was still comfortably on top.

The series leader improved the benchmark to 1:33.4419s, almost 0.3s faster than the morning’s opening session, in his Peters Motorsport Mazda BT-50.

Tom Alexander was again second in the Ross Stone Racing Holden Colorado, but this time 0.4398s off Harris’ best time.

The New Zealander nosed into the tyre wall entering the main straight during the session but appeared to not cause major damage.

Craig Woods (WSM Hilux), who lost the series lead last time out at Bathurst, was seventh-fastest, one position behind Aaron Cameron in the second Peters BT-50.

Armor All Qualifying starts this afternoon at 1515 local time/1615 AEDT.