Coulthard out to help McLaughlin’s championship

Coulthard out to help McLaughlin’s championship 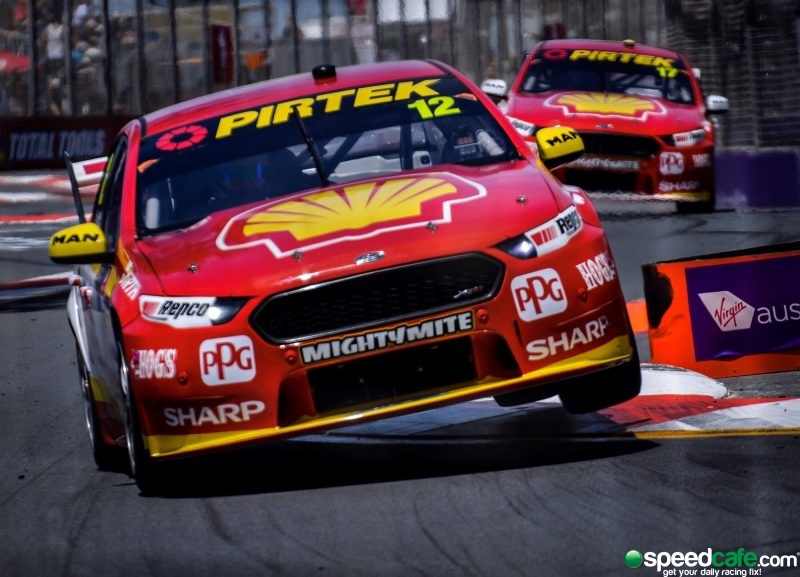 Fabian Coulthard has committed to helping Scott McLaughlin’s championship prospects where possible as the Supercars season draws towards a conclusion.

This weekend’s Vodafone Gold Coast 600 represents the third-last round of the 2018 Virgin Australia Supercars Championship with only Pukekohe and Newcastle to follow.

Second-placed McLaughlin reduced his points deficit to Shane van Gisbergen to 19 points with his podium in the Supercheap Auto Bathurst 1000, when van Gisbergen finished fifth.

Coulthard is 994 points back from van Gisbergen and therefore mathematically out of the hunt for the title.

He was, however, third-fastest in Friday practice, behind van Gisbergen and Shell V-Power Racing team-mate McLaughlin.

“I’ll do what I can to help Scott,” said Coulthard regarding the championship.

“Obviously when the team wins, we win, and that’s a big Penske motto, so we’ll do what we can.

“Obviously we’re a little bit out of the equation come our own championship, so we’ll do what we can when we can.”

While Coulthard may or may not be in a position to assist his team-mate, McLaughlin’s hopes depend very much on the performance of co-driver Alexandre Premat.

The Frenchman set up their impressive come from behind win in last year’s Sunday race on the Gold Coast with a drive which drew high praise from McLaughlin.

He exuded confidence when the significance of the weekend to McLaughlin’s title hopes was put to him.

“Of course it’s (the championship) always important and we are in big teams here so the expectation’s always there,” said Premat.

“For sure, there is a lot of pressure but we’ll do the job, keep it relaxed, easy, driving the good lap times, bring the car back, and step up on the podium; that’s pretty simple.”

With 150 points going to the winner in each of the remaining six races this season, and 138 points to the runner-up, McLaughlin can take the championship lead with two wins this weekend regardless of what van Gisbergen does.

Jamie Whincup is third in the standings but 404 points behind van Gisbergen and therefore cannot improve his championship position this weekend regardless of what happens in Surfers Paradise.

Armor All Qualifying for Race 26 of the championship starts tomorrow at 1005 local time/1105 AEDT.