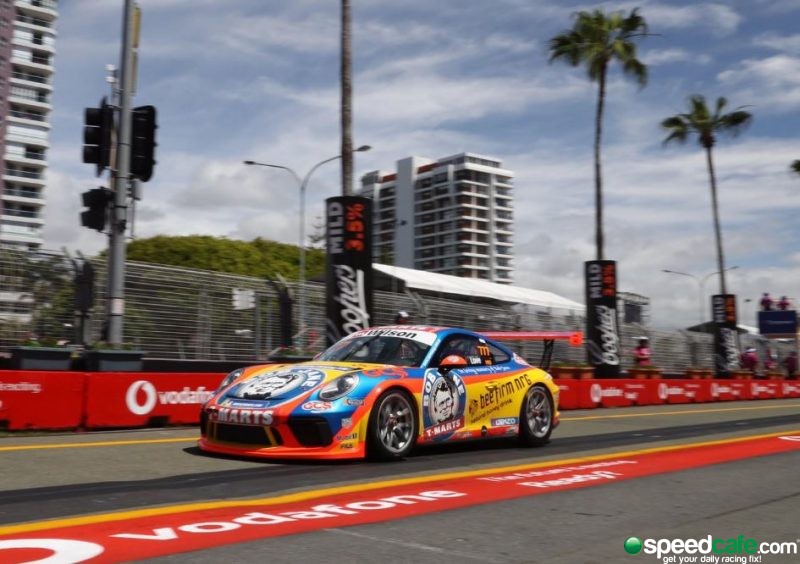 Almond proved just under a tenth of a second faster than James Moffat with the pair the only two capable of lapping the Surfers Paradise circuit under 1:12.5s.

Jordan Love was third fastest ahead of David Wall, while championship rivals Dylan O’Keeffe and Jaxon Evans were fifth and sixth.

Stephen Grove was the leading Pro-Am driver in 11th place, 1.3 seconds off the outright pace of Almond.

A mistake from Dale Wood saw the former Supercars driver spin at the Beach Chicane, sliding into the tyre barrier on driver’s left making comparatively light contact with the rear of the car.

Wood was able to carry on, returning to the pits under his own steam where the crew gave the car a once over before sending him back out on track.

Marc Cini threw a fan belt early in second practice which saw him sit out much of the 20 minute session, an easy fix but one which can’t be done mid-session.

As the session drew to a close Tim Miles found the wall at the opening chicane, tagging the tyre bundle with the nose of the car as the chequered flag flew.

Bamber made a slow start following an off in the opening practice session, ending proceedings in 13th and 1.5 seconds off the pace.

Making only his second appearance in the series, and his first time on track at the Gold Coast, the Porsche factory driver collided with the tyre bundle at the Beach Chicane during opening practice to end his session.

It damaged the front of the Grove Racing operated Porsche, and drew a red flag in the session before a conservative approach to the second session which left him down the order.

Carrera Cup next heads into qualifying at 1545.