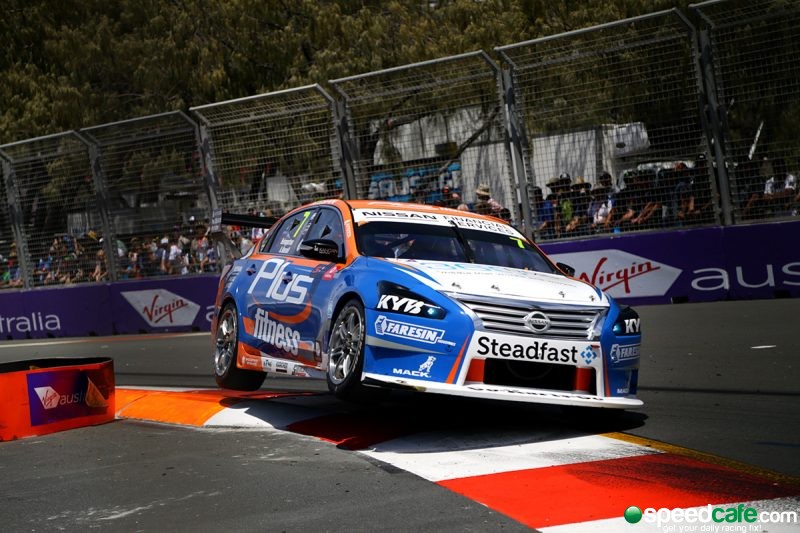 Nissan Motorsport’s Aaren Russell has set the fastest lap of the day so far in topping the co-driver practice session for the Vodafone Gold Coast 600.

Russell (#7 Pluss Fitness Nissan Altima) unseated Paul Dumbrell in the final minutes of the half-hour session with a 1:11.1204s which was two tenths quicker than team-mate Rick Kelly’s Practice 1 benchmark.

“It wasn’t an easy session; we had a brake drama midway through,” explained Russell, Andre Heimgartner’s co-driver.

“The pedal went to the floor at Turn 1, so it was a bit scary.

“But the team just do an awesome job and just feels good to drive a good car around here. Just feels so hooked up and I feel so comfortable in the car as well.”

The Novocastrian said that he was not on brand new tyres when he set the time.

“I think it was alright; obviously it wasn’t green but I think Andre had done a couple of runs on it,” he reported on the tyre set.

“It was alright but that’s probably the best set of tyres I’ve driven on for a while now.”

Earl Bamber was a late mover up the order as he slotted into second after the chequered flag in the #97 Red Bull HRT ZB Commodore.

The Kiwi’s effort bumped Dumbrell back to third in the sister #1 ZB Commodore.

Tony D’Alberto (#12 Shell V-Power FGX Falcon) and Macauley Jones (#8 Alliance Truck Parts ZB Commodore) also spent time on top during the final 10 minutes of the half-hour session before being shuffled back to fourth and seventh respectively.

There were two red flags during the session, caused by the #99 Erebus ZB Commodore and the #15 Castrol Nissan Altima.

Will Brown stopped on the chevron at pit entry with Car #99 blowing smoke, believed to be related to the power steering system.

Garry Jacobson nosed into the tyre wall at the end of the beach, causing what is believed to be not insignificant damage to Car #15.