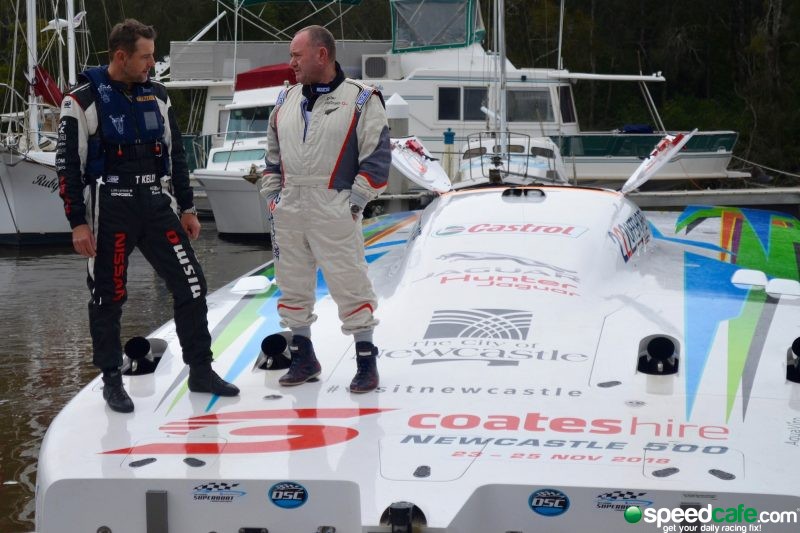 Todd Kelly and Darren Nicholson on the 222 Offshore

Todd Kelly will race a Class One Superboat in the final round of the Australian Offshore Superboat Championships later this month in Hervey Bay.

Kelly will take over the 222 Offshore of 2013 powerboat champion and former sailing world champion Darren Nicholson, who has clashing racing commitments in China.

The Nissan Motorsport co-owner has long held an interest in boating and drove the 222 Offshore recently at Lake Macquarie, adjacent to Newcastle.

“Todd came to Lake Macquarie last week and had a run in the boat and he did a great job,” said Nicholson.

“He’s been around boats for as long as he’s been around cars, so we’re extremely comfortable and happy to have Todd in the boat and take over my duties while I’m away.”

The craft in question is a 12-metre offshore powerboat powered by twin 750hp engines, and has been used to promote the Coates Hire Newcastle 500 in Nicholson’s home town.

It raced last weekend in the Lake Macquarie Offshore Superboat Championship, where 222 Offshore extended its lead in the Australian championship.

The Hervey Bay Offshore Superboat Championship takes place on October 27-28, with a shooutout to determine pole on Saturday and two races on Sunday.

It will mark the first competitive racing for Kelly since his final Virgin Australia Supercars drive, coincidentally, on the streets of Newcastle last year.