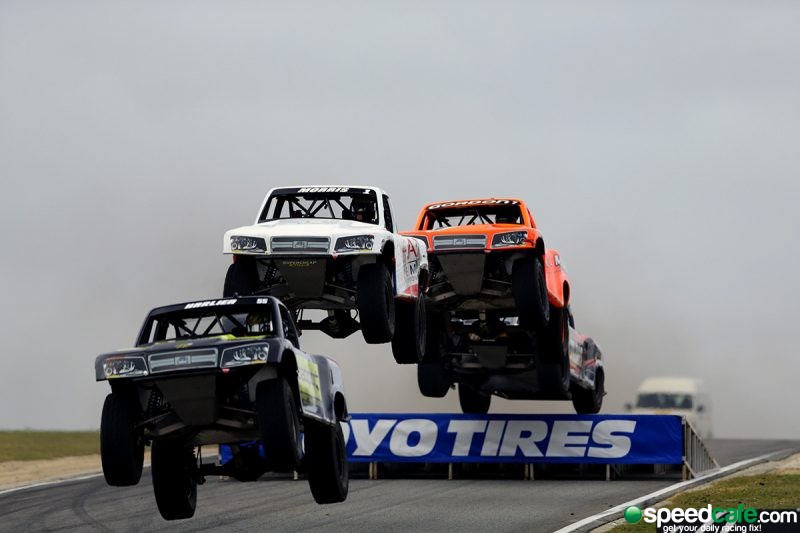 To be held over the October 26-28 weekend, it will come a week after the series was scheduled to compete as part of the supporting cast to the Virgin Australia Supercars Championship at the Vodafone Gold Coast 600.

SST was replaced on the bill by the Kumho Tyres Touring Car Series after CAMS suspended its Australian competition licence.

The AMRS is unaffiliated with CAMS, as it is run by the Benalla Auto Club-owned (BAC) Australian Auto Sport Alliance, and therefore can allow the category to compete.

“We are super excited to be able to give Australia what they want and that is for us to race,” said SST owner and competitor Robby Gordon.

“I want to thank Chris (Lewis-Williams, BAC CEO), Wayne (Williams, AMRS manager) and the team for asking us to come on board as part of the program, all of our sponsors and drivers are excited and looking forward to doing battle at the exciting Sydney Motorsport Park track.”

Williams hailed the addition of SST, which has not held an Australian round away from the Virgin Australia Supercars Championship since 2015, to the AMRS program.

“Everywhere they go, the Stadium Super Trucks pull a massive crowd, and we can’t wait to have them at Sydney Motorsport Park,” said Williams.

“They will put on a spectacular show for everyone watching, whether they’re at the track or viewing the live stream.

“Over the last couple of weeks, it’s no secret that Stadium Super Trucks has had to make some last-minute changes to their 2018 schedule, so we’re thrilled to have offered SST a place to compete and add them to our event program.”

Lewis-Williams is confident that the trucks are safe to race at a permanent circuit such as Sydney Motorsport Park after modifications which organisers made in light of the CAMS suspension.

“Sydney Motorsport Park is a very different venue to a street circuit, and the AASA and our insurers are comfortable with the work Stadium Super Trucks have done on addressing any safety concerns, such as improving the strength of the wheels and incorporating a new locking section for the body work,” he said.

“Our job at the AASA is to assist categories to go racing and that’s the opportunity we’ve been able to create for Stadium Super Trucks who want to keep racing in Australia.

“Although one avenue (Gold Coast) was shut down, that’s the beauty of having choice in the market, there is an alternate sanctioning body to give categories an opportunity to make a choice about how they want their motor racing to be run.

“The AASA and AMRS are completely aware of the popularity of Stadium Super Trucks and are pleased we’re able to give them an opportunity to continue racing here.”

“It’s awesome to be able to race in Australia in the Stadium Super Trucks at Sydney Motorsport Park next weekend,” said Morris.

“It’s extremely obvious from the public backlash that motorsport fans want to see us race and see the series continue to compete in Australia.”

The occasion will be the first time that Stadium Super Trucks has raced at Sydney Motorsport Park.

Its previous appearances in the Harbour City both came in 2015, at Sydney Speedway near Parramatta and at the Sydney 500 at Olympic Park.

By joining the AMRS bill, SST will share the weekend with 10 other categories, which include the GT-1 Australia, Australian Formula Ford, and Performax TA2 Muscle Car Series, with Sunday’s racing to be live streamed.

The news comes after Peter Adderton, founder of the series new Australian naming rights sponsor, criticised CAMS for what he claimed is an ongoing failure to disclose to SST exactly how the series can comply with the governing body’s safety requirements.

CAMS CEO Eugene Arocca claims that SST has in fact been informed and that he would not discuss the matter with a sponsor.

Matt Brabham leads the series with one more event set to come, at Glen Helen Raceway in California, after Sydney.