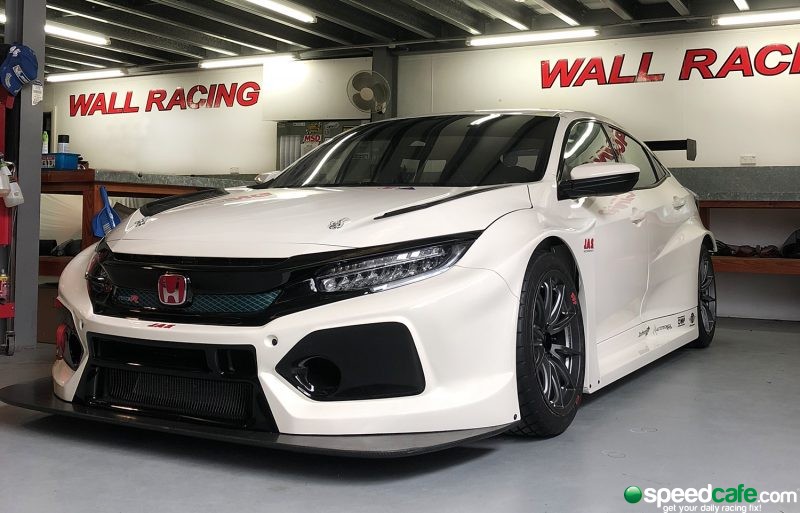 A second TCR car has landed in Australia following the arrival of a Honda Civic TCR race car as preparations for TCR Australia’s maiden season continue.

Build and prepared by Honda’s official global partner J.A.S Motorsport, the Italian company has sent the car to Australia in the hope it will be purchased and raced in the new TCR touring car class next year.

Wall Racing has taken delivery of the Civic TCR and is currently preparing the machine for a prospective customer.

The arrival of the Honda signals the second TCR Series vehicle to arrive in Australia, following the Audi R3 LMS that has been held by Melbourne Performance Centre (MPC).

MPC has already secured the exclusive local rights to supply vehicles from VAG (Volkswagen Audi Group), while it was recently confirmed that HMO Customer Racing has purchased two Hyundai i30N TCR cars to race in the series.

“It’s great to see another brand of TCR car arrive in Australia. You can really start to feel the momentum building now ahead of the 2019 season,” said Matt Braid, director of TCR Australia promoter Australian Racing Group (ARG).

“The J.A.S. Motorsport squad is world famous for their engineering capabilities and racing developments. They are also race and championship winners in their own right too. They offer a terrific, turn-key product.

“At this stage, the car is on loan from J.A.S, however, the intention is for someone to purchase the car, and secure a local distributor for the Civic Type R. There has been lots of interest, so I’d say that it is just a matter of time before we are able to confirm this.

“In the meantime, Wall Racing has been kind enough to keep the car at its race shop and will assist with running the car in upcoming test sessions.”

J.A.S Motorsport is keeping a close eye on TCR Australia as it hopes to supply cars to the competitors.

“Australia has a rich history in motorsport, so it was no surprise to see a TCR Series created down under,” said J.A.S Motorsport business development manager Mads Fischer.

“We have a long history with Honda’s global racing programs, and we are very proud of the business that we have developed alongside Honda to create the best race cars.

“We will be paying close attention to TCR Australia and are looking forward to partnering with the right team to help put Honda on the map in Australia.”

TCR Australia is yet to release its 2019 calendar but is hoping to unveil its plans within the next four weeks now Supercars has revealed its 2019 schedule.