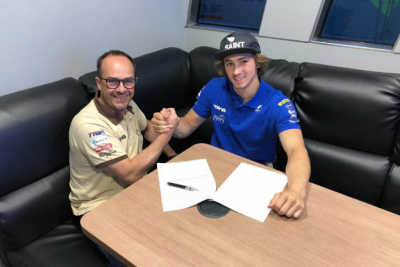 The Australian will form one half of an all-new line-up for the Spanish squad, which announced the signing of Japanese rider Tetsuta Nagashima in conjunction with Gardner’s.

“I am very happy to be part of the SAG Racing Team for the next two seasons,” said Gardner.

“We will work very hard to get the best results, I hope to have a good preseason this winter and know the team well to start in the best possible way. I really want to start on my new team.”

Gardner debuted in Moto2 with a partial campaign in 2016, after the team which he had initially signed for withdrew before the season started.

The 20-year-old has spent the past two years with the Tech3 squad, recording a best finish of sixth this year in Argentina.

He qualified second for the British Grand Prix in August before all three classes were washed out on race day.

Gardner is currently 17th in the championship, four positions higher than he finished 2017 despite missing three races after breaking both legs in a motocross crash.

The MotoGP season continues this weekend at the Twin Ring Motegi in Japan.