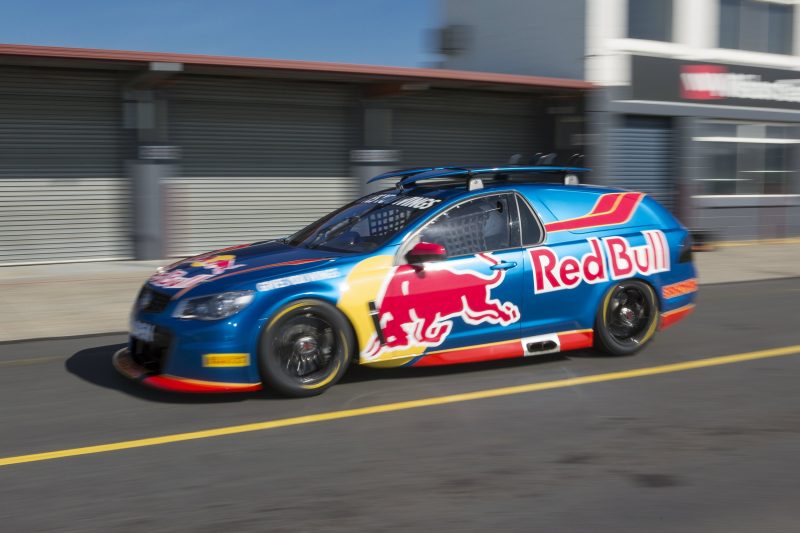 The Sandman as seen in 2016 when driven by Daniel Ricciardo

Triple Eight Race Engineering is selling off its Sandman wagon, a car which has been used for a variety of purposes including testing of the V6 turbo.

The one-of-a-kind machine Jamie Whincup’s race car for the start of the 2013 Virgin Australia Supercars Championship before it became a promotional/ride car and more recently a test bed for the team.

The Sandman made its debut at the 2014 Gold Coast 600 before a number of appearances elsewhere, including one in the hands of Formula 1 race winner Daniel Ricciardo at Sandown in 2016.

However, with that project shelved in April, a 5.6-litre engine V8 which reportedly produces 705bhp and revs out to 8200rpm has been fitted, according to V8 Sleuth which is managing the sale.

The car also differs mechanically from the specifications it started with as courtesy of a paddle shift feeding an Albins ST-6 transaxle and fly-by-wire throttle.

“(We’re) Certainly looking at the possibility of selling it so we can build something else, something new, and the Sandman has served its purpose in terms of both as a promotional tool and as a test bed for various things but including the V6 engine,” Triple Eight team boss Roland Dane told Speedcafe.com.

“We’ll see if the right person is interested for the right price we’ll sell it, if not, we won’t. I’m quite relaxed about keeping it, to be honest.

“We enjoyed doing the project. It’s very well proportioned, well built bit of kit that when we rolled it out four years ago at the Gold Coast I think everyone was pretty impressed by it.

“It was a bit of fun, doing something different, and creating a different promotional tool. We enjoyed it, so it’s emotional from that point of view.