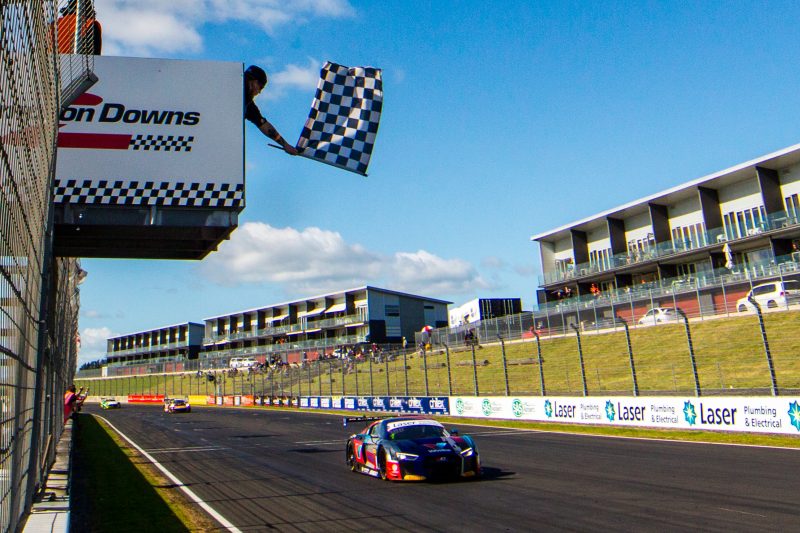 Four cars battled for the lead in the latter stint of the race as Tander tried to craft a move on John Martin.

He eventually made a pass which was as much aggression as finesse and then managed the margin to the finish in the #1 Jamec Pem Audi R8 LMS.

Martin took the early lead after the #63 Eggleston Mercedes-AMG GT3 of Peter Hackett and Dom Storey, which won Saturday’s Qualifying Race, was penalised three grid positions for a Safety Car infringement during that encounter.

Hackett struck further trouble when he made contact with Fraser Ross at the Double Bastards on Lap 3, having tried to take advantage after Ross gathered up a moment in the #59 McElrea Racing McLaren 650S.

Car #63 would be slapped with a drive-through, dropping it from third to ninth, while Ross managed to stay on the lead lap after being towed out of the gravel but had to pit for a puncture.

The drive meant that Scott Taylor led the race when he took over Car #222 after Lap 54, as Martin ran second after taking the reins of Car #911 back from Talbot.

Storey was next in the queue thanks to a fightback from Hackett, but they were shortly going to fall afoul of officialdom again.

Martin and Storey went nose-to-tail into the Dipper, the former defending on the very inside of the track.

There was a light touch but it was enough to push #911 wide and Storey drove through.

He handed the position back half a lap later but with no redress rule in Australian GT, another drive-through came anyway.

Martin pass Taylor on Lap 73 but had Tander on his hammer, and the three-time Bathurst 1000 winner got alongside a number of times, but to no avail.

It became a four-way fight as D’Alberto and Daniel Gaunt joined them in a hugely entertaining display.

Martin clung on to first place until Tander got a better run off the final corner sweeper, putting him in the slipstream of the Porsche.

He then dived down inside at Turn 1 as they started Lap 83, and there was nothing Martin could do to stop him.

Tander quickly established a one-second lead which he held for the 13 laps which remained, helping Emery to a second straight Australian GT Championship.

The result marked a notable turnaround after they were put on the back foot due to a driveshaft failure in pre-qualifying on the day prior. 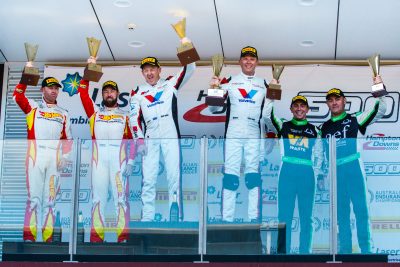 “Coming back to the start of the race I thought we might be on for a podium at best, but Garth had good pace at the end of the race and all of a sudden we were in with a good chance,” said Emery.

“There’s no doubt we’ll celebrate, we won’t miss on that!”

D’Alberto, too, pressured Martin but he settled for third in the knowledge that would be enough to claim the other title on offer, the AEC, for himself and Twigg.

“Achieving your goals is always pretty special, and to win it for Max and Scott Taylor Motorsport is awesome,” said D’Alberto.

“It’s lucky Max wasn’t on the radio because he was telling to boys to tell me to have a big crack!

“We managed the situation, we knew what we had to do, and came away with a podium as well, so it’s even better.”

Twigg explained, “It’s what we set out to achieve.

“We didn’t anticipate doing any sprint rounds, it was all about the Australian Endurance Championship, right from The Bend, to Philip Island, to Hampton Downs.

“The last lap I thought Daniel Gaunt was going to tag him and turn him around. That’s when I got nervous!”