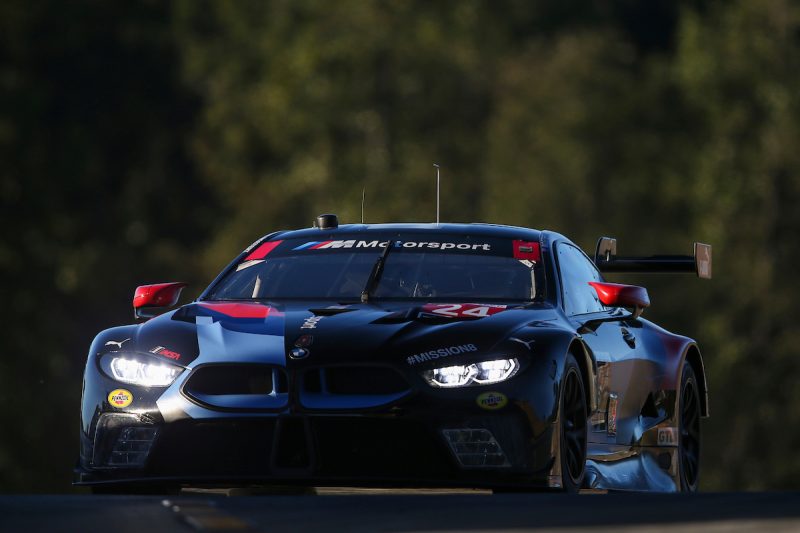 The BMW of Chaz Mostert, John Edwards, and Jesse Krohn has finished third in the GT Le Mans class of this year’s Petit Le Mans.

Briscoe and Westbrook missed out on the GTLM title in the IMSA WeatherTech Sportscar Championship by a slim margin after Antonio Garcia salvaged eighth in class despite a strange crash.

Nick Tandy took the sister #911 Porsche he shared with Patrick Pilet and Frederic Makowiecki to a class win after an impressive effort to stretch his fuel load to the end.

They had taken over the lead after Bamber had to take a drive-through for turning around a GTD entry.

Tandy’s cause was also helped after Garcia had spun and nosed into the wall while exiting the pits under a Safety Car, damaging the #3 Corvette Racing Chevrolet Corvette C7.R.

It appeared that Briscoe would therefore bring the #67 Ford home in second position but he was passed in the pits by the #4 factory Corvette of Marcel Fassler/Oliver Gavin/Tommy Milner.

The Sydney native then ceded position to the two RLL BMWs.

Garcia regained enough ground to finish eighth in the car he was piloting with Marcel Fassler and Jan Magnussen.

The former two clinched the class championship despite not winning a race all season.

The outright battle saw a thrilling conclusion when Renger van der Zande nabbed victory on the final lap for the #10 Konica Minolta Cadillac DPi-V.R Cadillac DPi which he drove with Jordan Taylor and Ryan Hunter-Reay.

Van der Zande was hunting down Filipe Albuquerque, who had been low on fuel in the #5 Mustang Sampling Racing Cadillac DPi and all but ran out with three corners left in the 10-hour race.

He was also pickpocketed before the finish line by the pair of Mazda Team Joest Mazda DPi cars, as second went to Car #77 of Oliver Jarvis/Tristan Nunez/Lucas Di Grassi and third to Car #55 of Jonathan Bomarito/Marino Franchitti/Spencer Pigot.

Albuquerque ultimately took the chequered flag in fourth position for he, Tristan Vautier, and Christian Fittipaldi.

The #7 Acura Team Penske Acura DPi had also looked a chance of victory but copped a drive-through when Helio Castroneves made a pass under yellow flags.

Pipo Derani was the initial race leader from pole position but picked up a puncture.

He got back in front at the second-last round of pit stops but was also light on fuel and had to bring the #22 Tequila Patron ESM Nissan DPi back into the lane for a slash.

The Brazilian finished sixth in the car he shared with Timo Bernhard Johannes van Overbeek.

The other Team Penske Acura, Car #6 of Juan Pablo Montoya/Simon Pagenaud/Dane Cameron was classified 32nd after a crash for Montoya in the second hour.

Felipe Nasr and Eric Curran won the Prototype class title after they and Gabby Chaves finished eighth in the #31 Whelen Engineering Racing Cadillac DPi, the first of those off the outright lead lap.

The top seven set a distance record of 443 laps of the Road Atlanta circuit.

Bryan Sellers and Madison Snow were crowned champions, however, with third in class along with Corey Lewis in the Paul Miller Racing Lamborghini Huracan GT3.

It doesn’t get any more thrilling than that final lap of the #MotulPLM @RoadAtlanta! pic.twitter.com/6rw06q6yk7