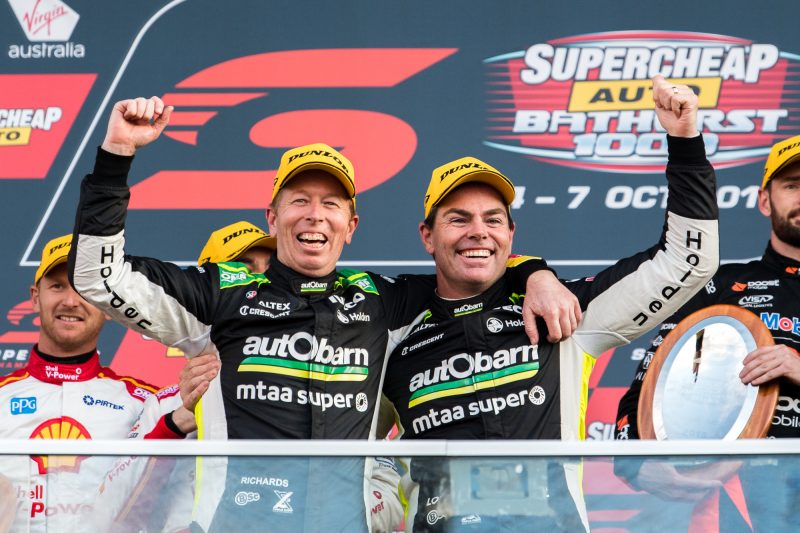 While Craig Lowndes quite rightly grabbed the headlines by scoring a fairytale Supercheap Auto Bathurst 1000 win, co-driver Steven Richards is now among an elite group of six drivers to have claimed five Great Race wins.

The 36-year-old combined with Lowndes to help the fan favourite to a memorable victory in what was his last outing at Mount Panorama as a full-time Supercars driver. For Richards the win ranks right up there with his best achievements and arrived 20 years on from his first Bathurst 1000 win alongside Jason Bright in 1998.

In the fast paced world of motorsport Richards has to soak up the moment and prepare for what could be a double triumph.

The freshly crowned Bathurst winner and his BMW Team SRM squad is in contention for both the Australian GT Championship and Australian Endurance Championship at the Hampton Downs (New Zealand) season finale this weekend.

Speedcafe.com Editor Tom Howard dissected the special Bathurst 1000 achievement with Richards and what it would mean for his family to come away with an Australian GT title. 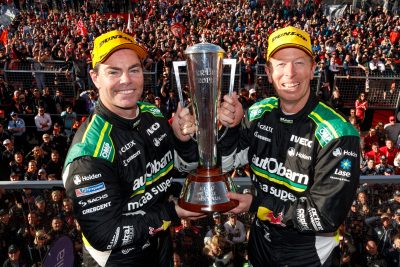 SPEEDCAFE: You have had a few days now for the Supercheap Auto Bathurst 1000 victory to sink in, how special was the reception both you and Craig Lowndes received at the podium and what does the victory mean to you?

STEVEN RICHARDS: It was special. In the times that we have been fortunate to be out there on the podium, that was definitely the biggest reception I’ve ever had, for obvious reasons.

It was great, probably because of the circumstances and all that sort of thing but just people, and how far back they went, all the way up the hill on pit straight, and all that kind of stuff it was just bizarre. I couldn’t believe it. Incredible.

Personally, one of the big things for me was just the last two times (I’ve won), and it just worked out by pure luck, the kids haven’t been involved, they’ve been actually back in Melbourne, and this time, to have Clay and Priya there as well was great.

It was good for them to see what that event is all about and how different it is for any other motor racing event that we have anywhere in the southern hemisphere. That was really cool.

Dragging them around everywhere and they got to see all of the pomp and ceremony of the media and how that will works and just the fact that their parents are so happy for a period. You know what I mean, it was nice. 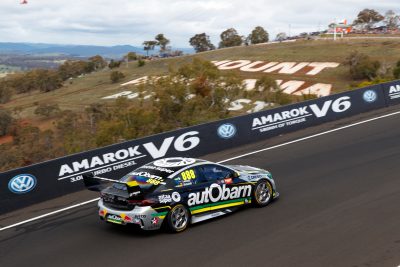 The #888 car on its way to Bathurst victory

SPEEDCAFE: It has been described as a fairytale win but where does that rank for you, this must have a special place?

RICHARDS: No question. Absolutely no question. I probably thought that after four wins that, and I understand every time you go up there you are in with a shot, but I probably thought that might be the last one. We had probably other than ’98 when we had the accident that was the toughest lead up, probably even a tougher because the ’98 lead up didn’t drag on. The crash happened and it was done and dusted and we got on with it.

But this one just dragged on, and on, and on, and on. At the start of the week we first got out in practice we had a power steering problem. They’re easy to fix. We could see we needed more pressure. That was the issue.

Then all of a sudden you’re changing everything. Everything that should be making sense is not making any sense at all, and the problem is still there. You start to think, ‘hang on a second, we’re now in the sixth practice session, and this thing still isn’t working properly.’

And then just seeing the way that the team, how they approached that and the methodical nature.

Irish (John McGregor) was just incredible. The way he stood up and just took the bull by the horns, along with some of the guys from Red Bull.

Sam Michael was also unbelievable in what he was doing. Craig and I sort of had to walk away. We were coming to the Top 10 Shootout and we’re testing the car in the Shootout for the biggest race of the year.

It was an incredible result after all of that. We probably downplayed a bit but there was a lot of stress going on in the garage and to come out with that result was just unreal. 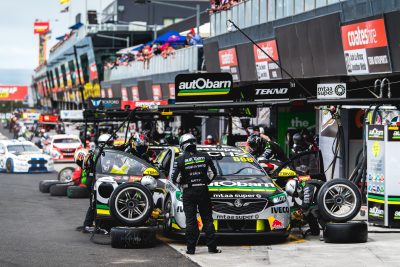 Steven Richards was lucky to escape from a huge moment entering pit lane during the race Pic: Daniel Kalisz

SPEEDCAFE: The victory coming on Craig Lowndes’ final run there as a full-time driver would have been special to have been able to help him achieve that?

RICHARDS: No doubt about it. If you’re going to have one guy in the car towards the end of the race, that really doesn’t feel the heat in the kitchen very often, he’s the man. An eight second lead seems like an eternity when you’re on the track protecting it but it doesn’t take much of a mistake or drama for that to evaporate. The last 20 laps was pretty intense.

SPEEDCAFE: We have to bring it up but you had a moment on the entry to pit lane. Did you think the race was over at that point?

RICHARDS: No I didn’t at all. I didn’t think it was all over. I was just kicking myself in my head that I’d made that mistake. I think I went in third or fourth position with about 15 or 16 laps of that stint to go. Anyway I just thought it’s more value here, you kind of save a bit of fuel and manage a bit of that.

And I thought I need to push on into pit lane so I can make another second in pit lane and Craig can then jump in the car in second.

And I knew I wasn’t going to go fall into the gravel because it was literally probably just the dew on the grass that kind of sucked the right front end into the gravel trap. Mate, I reckon I had it in reverse before I’d even stopped. It didn’t take long to work out what was going on. 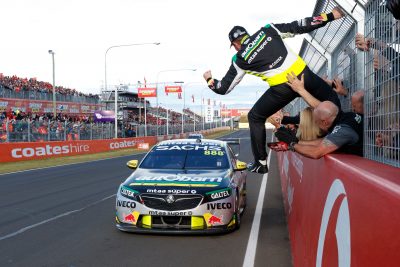 Steven Richards hangs off the pit wall to celebrate the win

SPEEDCAFE: Your celebration at the finish was pretty spectacular with you hanging off the pit wall fence. Was that planned?

RICHARDS: Look I did it in 2015, that though probably not quite as extreme. It’s such an enormous moment. That’s when it all really hits you. I mean if it’s a way to feel like you will become part of being inside the car with Craig. I don’t know, words are hard to explain, I get a lump in my throat every time I think about it to be honest. There is no better feeling.

The only better feeling is this weekend is if we manage to jag a championship in Australian GT.

SPEEDCAFE: That looks likely to have been your last drive with Craig at Bathurst as there is a bit of uncertainty with regards to co-drivers next year.

Will this win help you secure another co-drive perhaps at another team?

RICHARDS: I’m sure it does. It’s definitely better than not getting the job done that’s for sure. It would be a great way to wrap up the year for us if Craig and I managed to get the Pirtek Enduro Cup so focus is on Gold Coast.

What happens post Gold Coast is really in the lap of the gods. But clearly I’m as hungry for it as I’ve ever been. I love driving in those three events and I want to be a part of it with a team that’s got a chance of getting a great result. 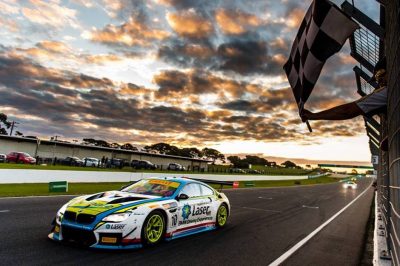 Richards has his eye on scoring a sensation Bathurst 1000 and Australian GT double pic: Daniel Kalisz

SPEEDCAFE: Moving to this weekend, you highlighted that you’ve got a chance for a bit of a double victory if you can get yourself a decent result over in New Zealand in the Australian GT Championship with BMW.

What does that mean for you? I know it’s not quite Bathurst but it’s massively important for you because you’ve worked really hard with this program.

RICHARDS: It does mean a hell of a lot, the importance of it. Every individual result or accolade is important. We’ve had a with the Australian GT program, we’ve had a bit of an up and down time over the last three years with it.

To get to a point this weekend where we’re actually in contention, has just been an unbelievable result.

I shouldn’t say that because we’ve had a good solid year. We haven’t had a DNF, the car’s performed as good as it probably should have. And here we are, in a position to win one or two of them. If we were lucky to get one or two, it would be an incredible sense of achievement for the team.

We’ve all been involved right from the start of the whole campaign. To be honest mate, from a personal perspective, and it would only be from me, my wife and the kids and our team, but it would be massive. If we come away with a result this weekend, it really is a big deal for us. 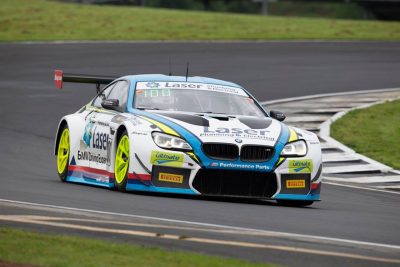 Richards in action at Hampton Downs

From a personal perspective, yes, it is up there with Bathurst.

No one knows about how tough it is to run your own race team. No one knows how difficult it is to deal with some situations that have gone our way over the last 18 months, two years. We’ve been very lucky. We’ve had incredibly loyal supporters in the form of our partnerships with BMW and Laser, BP and Mosley Mining, they’ve been along with us now for eight years.

Many of the things you and I talk about, they’re really important to me, they won’t mean anything to the readers looking at anything on Speedcafe.

But there’s a whole lot of personal stuff going on around this weekend that regardless whether we win it or not, if we get out with a straight car and have done the best we can, then it will mean a hell of a lot.