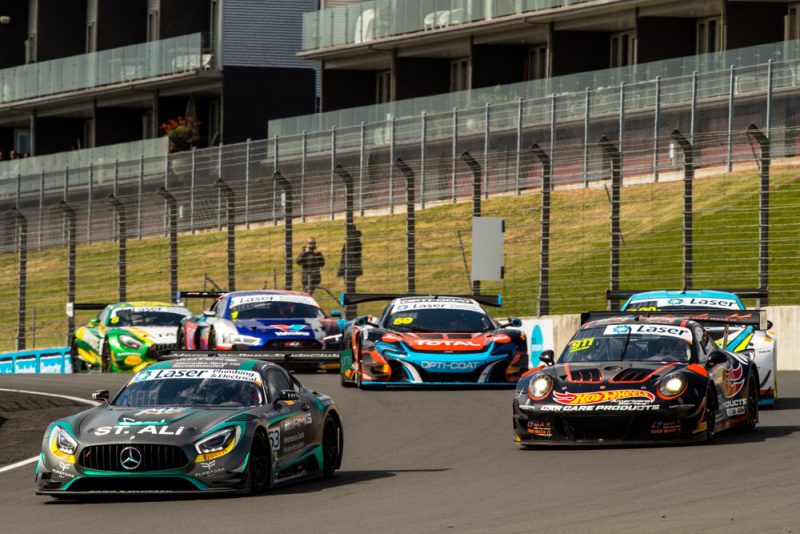 Peter Hackett leads the field away

Mercedes-AMG GT3 pair Peter Hackett and Dom Storey have qualified on pole for the Australian GT finale at Hampton Downs after winning the 30-lap qualifying race.

The #63 Mercedes-AMG started from pole by virtue of combined pre-qualifying times and Hackett led Talbot early on after the latter’s impressive move around the outside of Padayachee.

Hackett handed over to Storey after 14 laps and the latter ended up behind Ross when the pit stop cycle completed due to a longer CPS.

Storey and Martin then ended up in a serious battle which saw the pair run side-by-side several times before both passed Ross on Lap 20.

From there, Storey crept away to take victory and help Hackett close up to 10 points behind Ross at the top of the Australian GT Championship standings.

“It was fairly frantic in the beginning of the race,” said Hackett.

“We had full tanks and cold tyres and as good as our car is on fuel economy and tyre wear it takes time to bring the temperature in.

“We struggled a little bit early but managed to get the job done and handed the car to Dom who was just perfect in his stint.”

Added Storey on passing Ross, “I knew if I wanted to get the job done I had to do it straight away.

“Once I got onto the back of him I didn’t mess around for too many laps.

“It took me a lap to work out where he was strong and where I was stronger, and once I realised that what I had to do was get out of the aero and get up the inside of him I managed to do it over the back.

“Once the move was done it was nice and clean and just got on with my business.”

Garth Tander and Geoff Emery finished fourth after the former held out Tony D’Alberto during the latter half of the race.

Emery had started from seventh on the grid due to the #1 Jamec Pem Audi R8 LMS breaking a driveshaft in Tander’s pre-qualifying session.

D’Alberto and Max Twigg, in finishing fifth in the #8 Mercedes-AMG GT3, extended their Australian Endurance Championship lead over Richards/Michael Almond to 38 points as a result.

Richards/Almond were sixth after the Supercheap Auto Bathurst 1000 winner incurred a five-second penalty for a start infringement.

The #24 Audi R8 LMS of Tony Bates/Daniel Gaunt was a non-finisher after multiple hits in the opening corners of the race broke its driveshaft.

Tony Quinn made contact with Bates twice, the second after Scott Taylor slid into the #7 Aston Martin Vantage which ricocheted it into Car #24.

The field is next on-track for Warm Up at 0955 local time/0755 AEDT, before the decider of both the Australian GT Championship and Australian Endurance Championship, the Laser Plumbing & Electrical Hampton Downs 500, at 1405 local time.