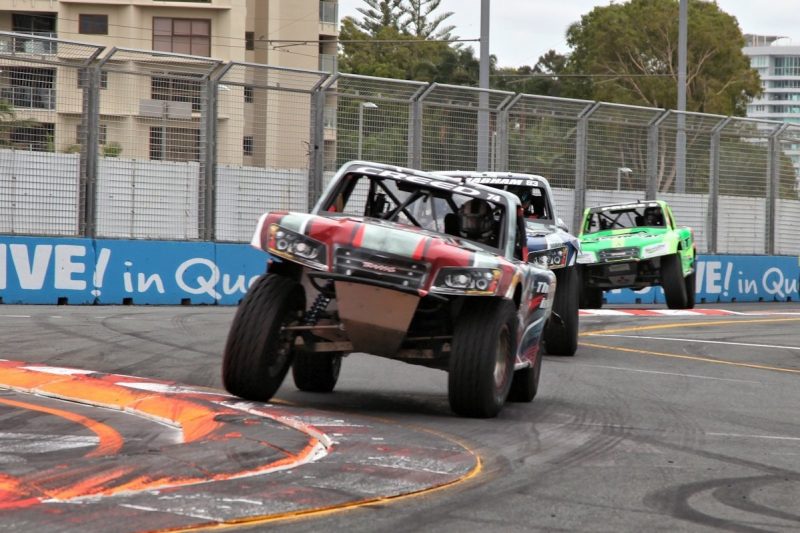 Stadium Super Trucks has issued a statement following a Supreme Court decision to uphold CAMS’ ban of the series, questioning the governing body’s consideration of the series’ safety modifications.

CEO Robby Gordon, under whose name the statement is made, has stated that SST will “pursue all its options against CAMS” if CAMS does not respond to its safety proposals.

SST had sought an injunction against the suspension of the series’ licence to race at CAMS-sanctioned events which was rejected by Justice John Digby in the Victorian Supreme Court in a decision handed down yesterday.

Its statement today claims that CAMS did not reasonably consider the safety modifications to vehicles and series rules which it had proposed in response to CAMS’ concerns.

“On 11 July SST sent a set of detailed proposals to CAMS addressing CAMS’ stated concerns. Those proposals included replacing the CAST wheels with stronger FORGED wheels and tethering the hoods to the vehicles.

“To date, CAMS has failed to respond to any of those proposals. Despite CAMS’ failure to respond, SST proceeded to install the stronger FORGED wheels and tethered hoods, at its own considerable expense.

“We disagree with CAMS’ assertion that CAMS put their concerns to us at any time. CAMS did not engage in providing guidance on how to improve safety and failed to even consider the measures taken by SST.

“CAMS officials in their evidence to the Court acknowledged that they did not know whether the measures taken by SST had addressed their concerns.”

CAMS’ own statement, issued a short time after the judgement was handed down, affirmed that an incident in Barbagallo when a truck threw a wheel into the pedestrian bridge was a key factor.

“(The safety) concerns were put to the category manager who failed to provide a satisfactory and suitable response to the dangers identified and the decision was then made to suspend the category in Australia. It’s important to note this suspension has been in place since May, 2018,” read the CAMS statement, in part.

There is no dispute over the timing of the suspension or notification from CAMS to SST, both of which occurred on May 8, two days after the Perth SuperSprint and three days after the pivotal wheel incident.

The suspension was, however, made pending further investigation and the Suspension Letter, sent by CAMS General Counsel Tahli Preston-Dixon, invited SST to respond by May 22.

SST’s legal representative (Mr Steven A Nichols from Rutan & Tucker) attempted to request further information on May 11 and May 21 but CAMS did not respond to those requests until May 30 with Ms Preston-Dixon citing being on leave as the reason for the delay, according to the judgement.

They issued a subsequent request for information on June 13 claiming that CAMS “had not provided a factual basis for its allegations” (of a breach of the CAMS Agreement due to safety issues), according to the judgement.

An Incident Report conducted by CAMS Technical Manager Scott McGrath, dated June 19, cited the high risk of a rollover and possibility of debris injuring/killing a spectator or official. The strength of wheels was raised as a particular concern, as stated in the judgement:

26 The Incident Report also identified a risk that, in a roll over, the wheels on an SST are susceptible to breaking away at the mounting point to the vehicle. It is now evidenced that this has occurred on multiple occasions, including on the day prior to the Nolan Incident (4 May 2018) and in an incident at the event the previous year (J Kostecki 5 May 2017).

The judgement reveals that CAMS contacted SST about its safety concerns on July 3:

32 On 3 July 2018, the defendant sought to substantiate its allegations in a letter to the plaintiff. The letter stated that the defendant remained of the view the SST Category of vehicle poses ‘an unacceptable risk to the health and safety of competitors, officials and the general public and that the venues being used … are unsuitable for the form of racing undertaken’. The letter cited eight incidents from Australia since 2015 as evidence of this manifest risk.

SST’s legal representative responded on July 11 and claimed it had made or proposed remedies to strengthen the wheels and improve fastening of hoods (bonnets). It also noted that seven of the eight incidents identified in the Incident Report occurred before sign-off of the relevant CAMS Agreement in February 2018. Regarding wheels, the judgement states:

36 Mr Nichols’ letter also identified the following corrective action that had been or would be undertaken by the plaintiff (the Proposed Corrective Action):

The plaintiff claims this is a rare occurrence. In any event the plaintiff has modified the wheel fabrication specifications by eliminating cast wheel construction and ensuring all new SST wheels are forged. This means wheels are far more resistant to breaking at the point of connection and fewer if any wheels will become detached from vehicles during races. The plaintiff intends to include this new specification in the rules and procedure book and to update its driver training and certification program.

The letter also notes a number of initiatives which SST was to enact regarding driving standards, penalties, Occupational Health & Safety policies, and racing rules, according to the judgement.

The judgement states that Ms Preston-Dixon did not respond to the letter.

SST’s legal representation subsequently cited to CAMS that by the same logic, the SuperUtes Series should have its licence withdrawn due to a succession of incidents, including two when wheels became separated from vehicles at Queensland Raceway in July.

That correspondence occurred on July 23, a day after those two incidents, and Ms Preston-Dixon responded on July 24 to invoke the dispute resolution process as per the CAMS Agreement.

A teleconference was eventually arranged between the parties for July 31, according to the judgement:

43 The teleconference occurred on 31 July 2018 (AEST). In attendance were Mr Gordon, Mr Nichols and Mr Cayzer (for the plaintiff) and Ms Preston-Dixon, Mr Smith (General Manager of Motor Sport for CAMS), Schenken (Director of Racing Operations OAM for CAMS) and McGrath (Division Manager, Technical for CAMS).

The transcript was not admitted as evidence as CAMS’ procedure states that such information is not to be relied upon in court proceedings when undertaken outside the litigious phase of the dispute.

SST’s legal representation sent an email on August 1 claiming CAMS was in breach of contract with SST’s parent company due to not co-operating with SST’s proposals:

The judgement reveals that CAMS does not dispute that SST has made efforts to address safety concerns, rather that it does not have sufficient detail to determine if the SST proposals are adequate:

47 In the subject application, by affidavit materials and in particular the affidavit of McGrath and Schenken, the defendant responds to the plaintiff’s technical assertions, its key assertions and its proposed modifications. McGrath deposes that he reviewed the submission, and formed the views that the plaintiff’s proposals were without adequate specific details. McGrath also notes there was no indication of what ‘testing program’ had been applied to the plaintiff’s proposals and therefore he could not provide an informed opinion on the suitability of the suggested solutions.

50 However, McGrath deposes that there is no evidence from the plaintiff that:

(a) the redesigned wheels will reduce or remove the likelihood of a wheel failure;

(b) the redesigned anchorage system of the hood will reduce or remove the risk of the hood and/or pieces of the hood coming off during racing; or

(c) the more rigorous driver training program provided to competitors in the Series.

CAMS Director of Racing Operations Tim Schenken expressed similar concerns in his affidavit regarding driving standards and the safety of the vehicles themselves, as well as the confined nature of the Surfers Paradise Street Circuit at which SST was to race next week.

Further, CAMS expressed a concern that any changes could not adequately be tested in time for the Gold Coast 600 on October 19-21.

Ultimately, the judged rejected the request for the injunction due to the safety concerns and the proximity to what would have been the next SST round to be held under CAMS sanction, on the Gold Coast.

SST has been replaced on the Gold Coast 600 support bill by a non-points round of the Kumho Tyre Australian V8 Touring Car Series.

The full judgement may be viewed HERE.

UPDATE: CAMS has issued a further statement from CEO Eugene Arocca to Speedcafe.com in response to this report. It reads:

“We acknowledge the judgement handed down earlier this week and maintain the safety of everyone involved in the sport is a top priority. As stated in the court’s judgement, his Honour agreed with our concerns.

“We are open to continued discussions with the category management to discuss a suitable path forward.”

CAMS issued to SST the disputed suspension notice two days after the Perth event without complying with its own rules requiring an incident report and without any prior communication to SST. Despite repeated submissions from SST on no less than six occasions, CAMS failed to address SST’s detailed safety proposals.  On 11 July SST sent a set of detailed proposals to CAMS addressing CAMS’ stated concerns. Those proposals included replacing the CAST wheels with stronger FORGED wheels and tethering the hoods to the vehicles. To date, CAMS has failed to respond to any of those proposals. Despite CAMS’ failure to respond, SST proceeded to install the stronger FORGED wheels and tethered hoods, at its own considerable expense.

We disagree with CAMS’ assertion that CAMS put their concerns to us at any time. CAMS did not engage in providing guidance on how to improve safety and failed to even consider the measures taken by SST.  CAMS officials in their evidence to the Court acknowledged that they did not know whether the measures taken by SST had addressed their concerns.

The assertion made by Scott McGrath to the Court to the effect that the SST Trucks have lift kits is both false and absurd.  SST trucks do not have lift kits at all.  In fact, SST trucks have a lower centre of gravity and are lower to the ground than the production ute sold by manufacturers in Australia.

In considering whether to issue the injunction sought, His Honour said: “In the circumstances, maintaining the status quo carries the lower risk even if it ultimately transpires that refusal of the injunction was in error and the plaintiff succeeds on its claims at trial.”

In a statement by CAMS CEO on 11 October 2018, Mr. Arocca stated that “we have been open with the category manager about these risks and what action could be taken to enable them to return to action in Australia”.  This assertion by Mr. Arocca is false. SST points to the evidence before the Court that the internal report prepared by CAMS in June 2018 was not disclosed until the day before the hearing.  Further the documented communications between the parties confirm the falsity of Mr. Arocca’s statement. One would think that if Mr. Arocca believed his own statements, then someone from CAMS would have addressed the detailed proposals that SST presented on the 11th July. They have not.

SST has always been, and remains willing to work with CAMS to address the concerns raised by CAMS. SST challenges CAMS to meet and immediately to review SST’s proposals. SST have numouros contracts in place that it is about to breach ie  series sponsors, TV commitments and driver/driver sponsor agreements, as well as a 3 year Boost Mobile agreement as stated by CEO Peter Adderton, CAMS is forcing SST to breach these agreements.

But if CAMS continues to fail to respond, then SST will have no alternative but to pursue all its options against CAMS.