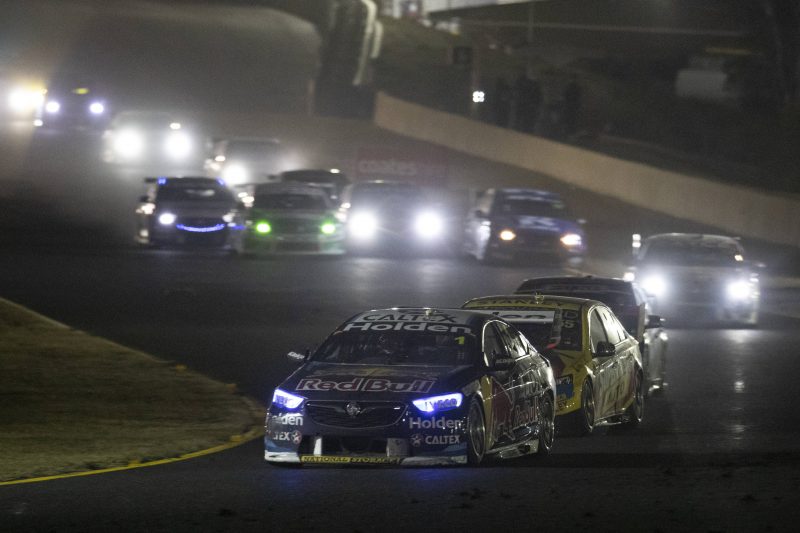 The Sydney SuperNight 300 will be dropped for 2019

Supercars has revealed a major shake up for its 2019 calendar which has seen Sydney Motorsport Park dropped and Perth’s Barbagallo Raceway awarded a night race.

The championship has taken the wraps off its new 15 round schedule that features several changes and movements and one less round compared to this season.

Supercars teams have been pushing to reduce the calendar and ease the operational flow for next year while the series has actively attempted to find better weather windows for certain events.

Arguably the biggest change is the decision to drop Sydney Motorsport Park despite the success of the inaugural Red Rooster Sydney SuperNight 300 this year.

The circuit has hosted an event in August since 2014 but the championship has elected to remove the event with plans for it to return as a possible night race curtain raiser in January 2020.

While Sydney disappears from the calendar entirely, night racing will continue with an all-new format for the visit to Perth’s Barbagallo Raceway in the first weekend of May.

The track will host a meeting from Thursday to Saturday with racing under lights for Supercars on the Saturday night.

Supercars is currently working with the West Australia Sporting Car Club to secure floodlighting for the venue.

“The premise of doing the night race in Perth was that the track has a natural amphitheatre which makes it easier to light,” Supercars CEO Sean Seamer told Speedcafe.com.

“It also means that for fans on the East coast that wouldn’t travel that distance they get to watch us race in prime time on the eastern seaboard.”

As previously reported the Adelaide 500 will kick off the year in its usual early March slot followed by the Formula 1 Australian Grand Prix which will again act as a full championship round.

Tasmania will host the third round and Phillip Island the fourth on back-to-back weekends with the latter securing a new deal and support from Victorian government to remain on the calendar despite having been under threat.

“It has been done before and we have worked on the operational flow and I think it puts a really interesting story around the two events,” said Seamer.

“It generates a lot more for the events and for the fans and it also means we are not racing on holiday weekends.

“The Queensland teams are very supportive of it. They can leave their teams down there for the week.”

Winton also retains its May slot although Supercars will only be in action for two of the event’s three days.

Darwin continues in its June berth before visits to Townsville and Queensland Raceway in July.

Following Sydney Motorsport Park’s demise, The Bend Motorsport Park will host the only round in August as the South Australian venue continues in its slot.

However, the back end of the year will take on a much different look with the ITM Auckland SuperSprint taking over the Sandown 500’s traditional September date.

Supercars says there are multiple reasons behind the switch.

The championship has elected to sea freight its cars and equipment to Pukekohe, which will require a longer timeframe prior to and after the events to allow for the shipments to reach their destinations.

Avoiding the AFL and NRL finals has also been touted as a reason for moving Sandown 500 to November which will see the race become the penultimate round of the championship and conclude the Pirtek Enduro Cup.

It is also anticipated that November will offer better weather in Melbourne.

Sandown’s moves means that the Supercheap Auto Bathurst 1000 will open the Pirtek Enduro Cup although The Great Race will take place from October 10-13.

Gold Coast will continue in its familiar October position but will now clash with the Australian Motorcycle Grand Prix which is likely to result in a change of format.

Supercars wishes to host one 500km race similar to Sandown which is hoped will finish before the MotoGP race begins at Phillip Island.

A move to change the format will be put to the Supercars Commission at next week’s Vodafone Gold Coast 600.

“We are looking to move the Gold Coast to a 500km format as it is at Sandown and we are working with channel 10 on scheduling and we will be done racing by the time MotoGP starts at 4pm on Sunday,” added Seamer.

“We are still working through the scheduling with the operations team and that will go before the Supercars Commission next week but that is the premise.”

The championship will once again conclude with a trip to New South Wales for the Coates Hire Newcastle 500.

It is pertinent to note that Supercars has decided to remove its official pre-season test day at Sydney Motorsport Park.

A non compulsory test will however be held at Phillip Island and Queensland Raceway on February 14 a day after the official championship launch in Melbourne.

It is expected that the Phillip Island test will be the first opportunity to see the all-new Ford Mustang Supercar hit the track.

The bulk of the teams are expected to test at Phillip Island which has now become an official test venue along with Sydney Motorsport Park and traditional test tracks Winton and Queensland Raceway.