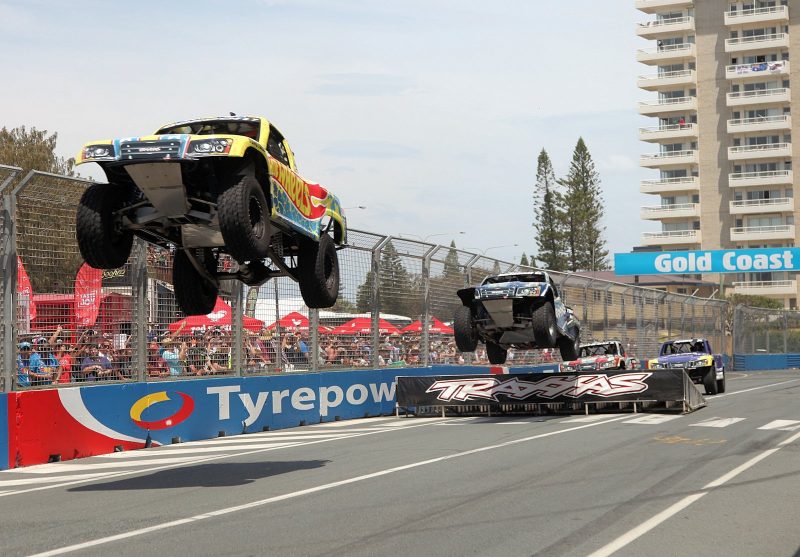 Robby Gordon Entertainment, which owns the series, had applied for an injunction against the ban ahead of the Vodafone Gold Coast 600 which it had been due to appear at in just over a week’s time.

According to a statement from CAMS issued after the judgement was handed down, the ban had been in place since May, shortly after an incident when a wheel struck the pedestrian bridge at the Barbagallo Raceway Supercars event.

The matter went to court on Friday of last week but a decision was delayed until yesterday in order to allow Justice John Digby time to consider the evidence.

The decision was pushed back another day when Stadium Super Trucks attempted to introduce new evidence from the Supercheap Auto Bathurst 1000 meeting, namely the incident when the #1 Triple Eight Supercar lost a wheel and when a Touring Car Masters car broke a tailshaft, part of which was thrown into an overhead sign.

That evidence was not admitted.

CAMS’ statement not only affirms that the ban was made on safety grounds, as first reported by Speedcafe.com, but clarifies that the wheel incident in Perth was one of the key considerations in the ban.

“Following a serious incident at a Stadium Super Trucks round in Perth in May, a CAMS working group was established to consider the safety risks of the category,” read the statement, which is reproduced below in full.

“A number of safety related incidents were then analysed and CAMS’ expert view was that the category posed a significant and increasing risk.

“It was CAMS’ view that the potential risks were too great to continue, particularly at a confined street circuit.”

Stadium Super Trucks has raced predominantly on street circuits in Australia, having become a fixture on the Adelaide 500 support bill, a regular at the Gold Coast 600, and also appeared at the Sydney 500.

The series raced at Barbagallo and Darwin’s Hidden Valley last year, before returning to the former in 2018.

CAMS CEO Eugene Arocca has reiterated that the safety of competitors, officials and spectators is paramount following the outcome in court today.

“Whether it is grassroots motor sport or competition on the national stage, the safety of competitors, officials and spectators is paramount and something we will not compromise on,” said Arocca.

“As the governing body for four-wheeled motor sport in Australia, we have a responsibility to ensure we do everything possible to make the sport as safe as it can be, and we believe this category poses a significant risk, particularly on a confined street circuit.

“We have been open with the category management about these risks and what action could be taken to enable them to return to action in Australia.

“Suspending a category is always a last resort. Unfortunately we had no other alternative in this case as we believe there is a significant risk to competitors, spectators and officials.”

Stadium Super Truck’s Director of Partners and Operations Nathan Cayzer told Spedcafe.com that he could not comment on the specifics of the matter but did thank the fans of the series for their support.

“At this point in time we are not in a position to say what our next move is, but we will certainly relay to our Stadium Super Trucks fans, who have been very loyal to us, what we will be doing going forward,” he said.

The Kumho Tyre Australian V8 Touring Car Series has been added to the support bill as a replacement for Stadium Super Trucks on the streets of Surfers Paradise and is set to feature a 14-car field for the non-points round.

Below is the full statement released by CAMS

CAMS’ responsibility is to ensure we do everything we can to make motor sport as safe as possible for everyone involved in the sport, including competitors, spectators and officials. We are delegated this authority by the Federation Internationale de l’Automobile (FIA).

The decision to suspend any category is always a last resort and one we don’t take lightly, including this category which has proven to be quite popular with motor sport fans.

Following a serious incident at a Stadium Super Trucks round in Perth in May, a CAMS working group was established to consider the safety risks of the category.

A number of safety related incidents were then analysed and CAMS’ expert view was that the category posed a significant and increasing risk. It was CAMS’ view that the potential risks were too great to continue, particularly at a confined street circuit.

These concerns were put to the category manager who failed to provide a satisfactory and suitable response to the dangers identified and the decision was then made to suspend the category in Australia. It’s important to note this suspension has been in place since May, 2018.

Since then, the category’s management had applied to the Supreme Court of Victoria to overturn that suspension, filing an injunction against CAMS, however today that injunction was denied in court, vindicating CAMS’ position.