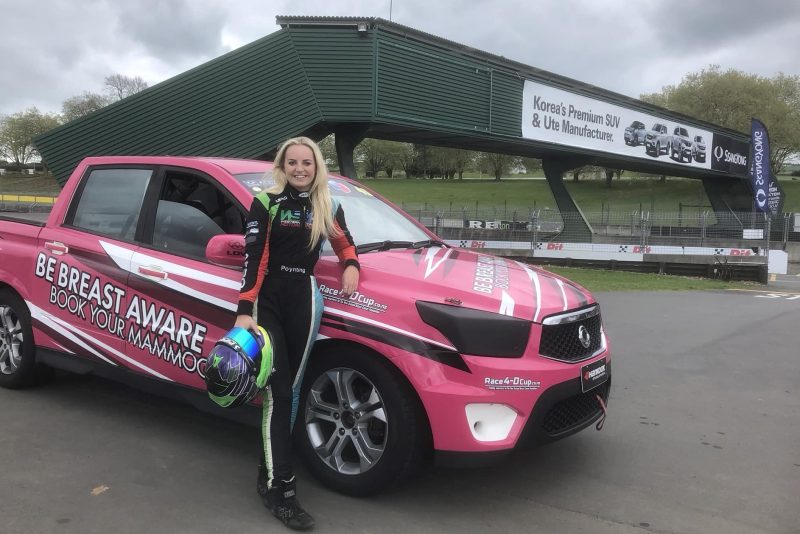 Charlotte Poynting has landed a scholarship to race in New Zealand after rushing from a SuperUtes race on Saturday at Bathurst to arrive at Pukekohe the following morning.

Poynting will contest the full 2018/19 season of the SsangYong Racing Series after winning the SsangYong Scholarship for female drivers.

She clinched the prize just a day after wrapping up her debut round in the ECB SuperUtes Series at Mount Panorama early on the Saturday afternoon, before returning home to Newcastle.

“I left straight after the last race, at about a quarter past one, and jumped straight into the car and bolted for the airport,” Poynting explained to Speedcafe.com.

“I flew to Auckland at 6:30 on Saturday afternoon, I think I got into bed at 2am in Auckland, and was up at 6 o’clock to head straight out to Pukekohe.

“It was very hectic, I was very happy to be home on (Monday) afternoon.”

The scholarship covers most of the costs to race in the five-round series which starts this weekend as a support to the Australian GT Championship at Hampton Downs.

Poynting competed against five other drivers, including in a shootout in a SsangYong Actyon ute.

“The winner has pretty much the entire season funded. All I have to cover is my flights and accommodation to get there and whatnot,” said Poynting.

“There were six girls in total, we went out with a driver coach in the morning and then they sent us out for one session by ourselves.

“Then they picked the top two finalists and sent us out with a driving instructor with the instructor driving and us in the passenger seat so they could tell us what the limits of the cars were.

“Then we got three laps by ourselves and whoever did the quickest overall time for the three laps put together won the scholarship, and I’m pretty sure I was about three seconds quicker (across three laps) than the next girl.”

Poynting will therefore not only drive on two different sides of the Tasman in the same weekend, but also race in a third different car in as many weekends when Aussie Racing Cars, her regular series, wraps up for the year at the Vodafone Gold Coast 600.

“I think it’s going to be really good to be in a car for the whole off-season rather than having three months off,” said Poynting.

“I’ll be in the seat and then hopefully testing the SuperUte as well and just doing as much driving as I can. I think it’s really going to help my development.”

Before then, she will get a second SuperUtes start at her home event, the Coates Hire Newcastle 500, after a daunting first-up effort at Mount Panorama.

The 19-year-old had not previously raced at the circuit and had barely more than a dozen shakedown laps in a SuperUte before the first two days of the event were affected by rain.

“I loved it, it was such a great experience,” she added.

“Obviously we struggled a little bit without testing the car and being on the track before.

“It was a massive learning curve, especially with the rain that didn’t help us much, but it was such a great experience and by the second-last lap of the last race I was on pace with the field so hopefully by Newcastle we’ll get two test days under my belt and by Newcastle and I can get well and truly up there.”

Round 1 of the SsangYong Racing Series takes place this weekend (October 13-14).