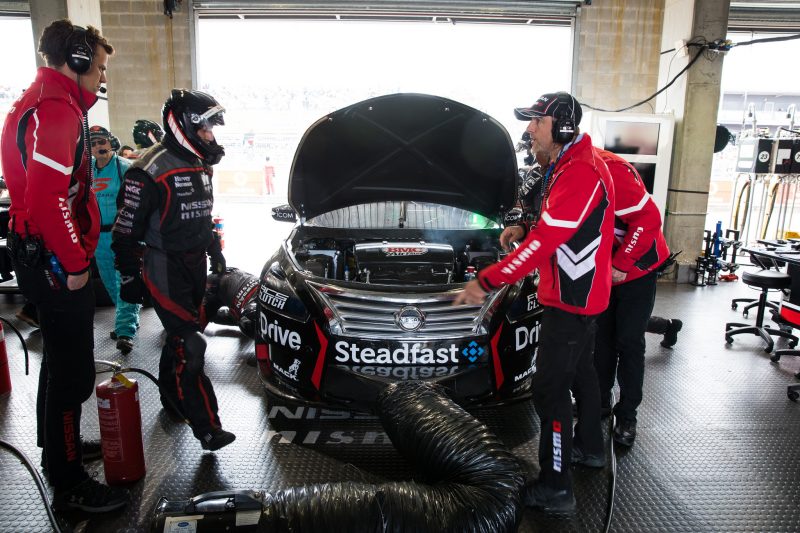 Nissan Motorsport will investigate a series of ‘super strange’ engine issues that hampered its performance at the Supercheap Auto Bathurst 1000.

The Braeside squad appeared to struggle for straight-line speed and reliability at Mount Panorama which has left the team perplexed.

Michael Caruso’s Altima, which he shared with Dean Fiore, suffered the bulk of the power problems, undergoing three engine changes during race week before a failure on Sunday saw the car retire on lap 72.

Its demise arrived shortly after a brake bias adjuster was knocked during the pair’s first driver change, resulting in Fiore locking up and making contact with the wall at Hell corner, losing almost two laps as the team inspected the damage.

The reliability concerns came as a shock to the team and drivers which have enjoyed strong performances from its improved engines this year.

“We have come to Bathurst and changed three engines which feels like an absolute new record. We have had problems with our straight-line speed throughout the weekend which is super strange,” Caruso told Speedcafe.com.

“This is the first time we have had something like this.

“We will have more time to understand it when we get back to the factory.”

Concerned by the problems, team manager Scott Sinclair says the issues will be fully investigated to prevent a repeat in the future.

“We need to figure out what’s happened,” Sinclair told Speedcafe.com.

“We know we’ve got some challenges there, but a large part of our improvement this year has come from engine performance and as a result, we’re pushing everything harder, all the components harder, and with that, there is some unreliability.

“While it’s certainly not all doom and gloom, we made some good gains. But we’ve still got a lot of work to do.

“It was a very challenging day for us and not the way we wanted it to go. We were just on the back of that second group of cars.

“There was probably six or seven really quick cars and we were in that next pack, but we were on the back of it, so it was just couldn’t make any inroads.”

The pair had been on course for a top 10 before losing out in the final stages.

“We lost a bit of time in the mid-part of the race, but ultimately, we got the most out of the package,” said Kelly.

“We had hoped we are arriving here with a strong car, but it looks like we’ll got a bit of work to do.

“It’s a bit of a kick in the teeth for everybody. We got the most out of what we had on the day. But the teamwork side of things was executed very well.

“We’ll grab the points and get out of here.”

Simona de Silvestro and Alex Rullo finished a credible 14th having started from the back of the grid, while team-mates Andre Heimgartner and Aaren Russell claimed 16th position.

The championship heads to Queensland for the Vodafone Gold Coast 600 from October 19-21.