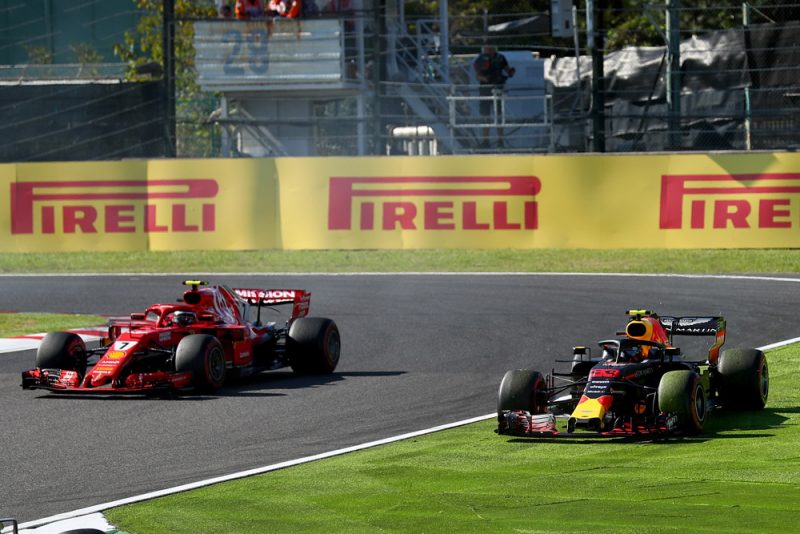 Max Verstappen leaves the circuit while battling with Kimi Raikkonen

Formula 1 race director Charlie Whiting has explained the reason some incidents were punished during the Japanese Grand Prix and not others.

Max Verstappen picked up a five second penalty early in the race, but escaped any action from the officials when he tangled with Sebastian Vettel.

Another incident between Kevin Magnussen and Charles Leclerc, that left Magnussen with a puncture and triggered the safety car, also went unpunished.

In the first instance, Whiting suggests a penalty was warranted because Verstappen rejoined the circuit in an unsafe manner, which then pushed Kimi Raikkonen of track.

“You’re required to rejoin safely, and Kimi was there and he (Verstappen) pushed him off the track. I think that was a fairly straightforward one for the stewards,” Whiting said.

“The second one was a bit of a classic, really.

“Seb tried to get up the inside, it was a reasonable move, got halfway alongside, Max turned in… a bit of a classic really.

“As you know, stewards don’t normally give penalties unless they are sure one driver was wholly or predominantly to blame.

“Opinions will vary whether it was equal blame, but certainly no driver was predominantly to blame.”

According to Whiting, video evidence of the Magnussen/Leclerc incident showed both drivers moved at almost the same time, and as a result no penalty was handed out.

“It was quite an interesting one actually,” Whiting explained.

“If you analyze it very, very carefully, what you see is two cars coming down with Kevin not moving, and then Charles catches, catches, catches, he decides to go to the right, and at exactly the same time – on the video there’s one frame difference – then Kevin moves.

“I think it’s impossible to say that Kevin blocked him, it was just he made the decision that he was going to go right fractionally after Charles had.

“You had to look at it quite a few times and analyze it in little detail to see that, but I think that it’s just unfortunate, and that’s what the stewards felt.”

Also penalised during the race was Fernando Alonso, who cut the chicane despite having been pushed off the circuit by Lance Stroll.

“He cut the chicane, drove quickly across the gravel and came back on way in front,” Whiting said.

“I think it was pretty clear that he had gained an advantage by leaving the track.

“The stewards felt that Stroll had actually forced Fernando off, so you could not say that because Fernando was forced off he was entitled to cut the chicane. He wasn’t.

“So they felt each driver should get a five-second penalty for two separate offences.”

Vettel now trails Hamilton in the championship by 67 points, with 100 left on offer with four rounds remaining, the next at the Circuit of the Americas next weekend.