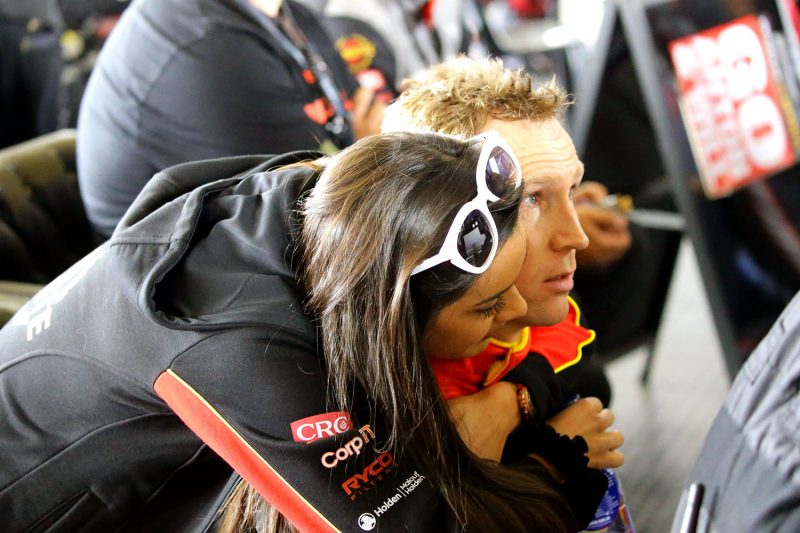 David Reynolds is consoled after his heartbreaking Bathurst exit

Jamie Whincup has expressed his sympathy for David Reynolds after a physical ailment cost him the chance of winning the Supercheap Auto Bathurst 1000.

Reynolds was favourite to claim a back-to-back Bathurst triumph before he suffered severe cramping in his legs which he described as the worst feeling experienced inside a race car.

Initially his right leg was afflicted as he surrendered the lead on lap 135 to eventual winner Craig Lowndes and elected to carry on through pain after what was expected to be final pit stop when his left leg began to suffer.

It proved too much to bare though as he handed the car over to co-driver Luke Youlden who drove to 13th at the finish.

Like Reynolds, Whincup has enjoyed the highs of winning at Mount Panorama but has also endured the lows of coming up short in Supercars’ showpiece event.

The seven-time champion’s own victory shot evaporated when the #1 Red Bull Holden shed a wheel on the start/finish straight while occupying second on lap 40.

Speaking after the race, Whincup empathised with Reynolds’ situation.

“You never want to go through that as an athlete, but it just shows the human element,” Whincup told Speedcafe.com.

”The intensity that goes on out there, if you don’t quite get it right it bites you hard. I certainly feel for him.

“Hopefully he is okay, gets some decent nutrition in and gets some good sleep.”

Last year’s winner, Reynolds, who claimed pole position on Saturday, admitted that a tough schedule in the lead-up to the race had hampered his preparation leaving him feeling 50 percent for Sunday’s event.

Whincup has experienced the hype, energy and extra commitments that surrounds such a feat and was actually happy to avoid pole position this year.

“Pole here, I wasn’t too disappointed not getting pole because it massively takes it out of you,” he added.

“Just the energy that it zaps from you on the Saturday before the biggest race of the year is huge. I’ve had it before, so I wasn’t too disappointed.

“No doubt he would have got minimal sleep Saturday night, wouldn’t have felt that hungry, poor nutrition and boom, yeah it got him.”

Despite the early race drama, Whincup and co-driver Paul Dumbrell were able to recover from going two laps down to finish in 10th position.