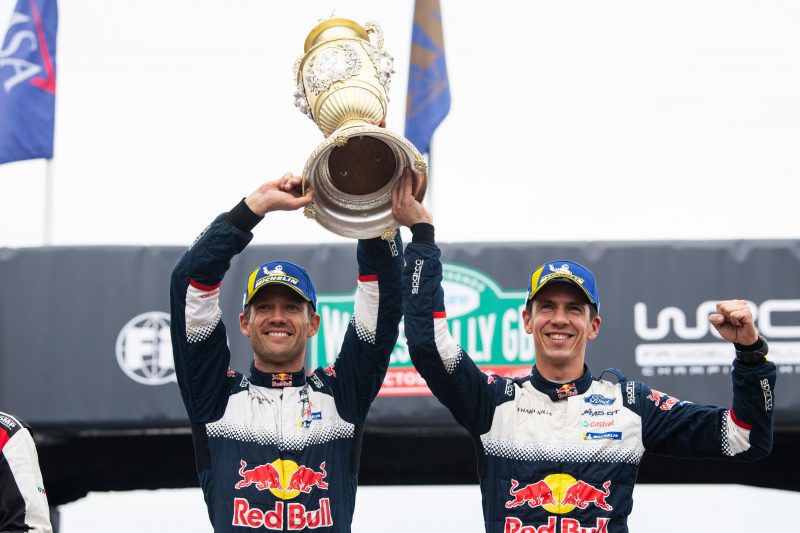 Ogier took a 4.4s advantage into Sunday’s five stages but Latvala seized the lead by winning the first two of those, including the Power Stage which ran earlier in the program.

However, the #1 M-Sport Ford was fastest through the final three stages and Ogier took a 10.6s win which seemed highly unlikely after a Friday morning which he had described as a “disaster”.

With the three bonus points from the Power Stages, the five-time defending world champion cut his deficit to the current championship leader from 23 points to seven.

“We had a very difficult start on Friday and thought the rally was almost over, but then we fought back with everything we had,” said Ogier.

“We knew that the podium was still within our reach and when Ott (Tanak) had his problems it became a big fight for the win.

“Jari-Matti was determined to win himself and was very quick, which forced us to react. Luckily I was able to finish the rally with three perfect stages – especially SS22 which was as close to perfection as I can get and I’m glad I could make the difference there.

“It’s a great step in the right direction for the championship and puts us right back in the fight.”

Neuville started the final day in eighth, immediately behind his two Hyundai team-mates on the leaderboard, but ultimately salvaged fifth overall and two Power Stage points.

The Belgian had suffered a major setback when he slid into a ditch on Saturday.

“We have given it everything this weekend,” said Neuville.

“The mistake yesterday ended any chance of scoring a podium but we’ve pushed hard to reclaim a few lost positions. The championship is far from over.”

Hayden Paddon, in the #6 i20, finished seventh overall in his second-last WRC event of 2018.

“There are some positives to take away from this weekend even if the result doesn’t do us justice,” said the New Zealander.

“We took some fastest splits and top-three stage times on Saturday, and generally found comfort in the car.

“This morning’s stages were incredibly slippery. We couldn’t read the grip and the pace notes weren’t optimal. The second loop was better.

“With only 15 seconds between fourth and eighth, it was a close fight.

“We will now prepare for our final WRC event of the season in Australia, determined to finish the season on a high.”