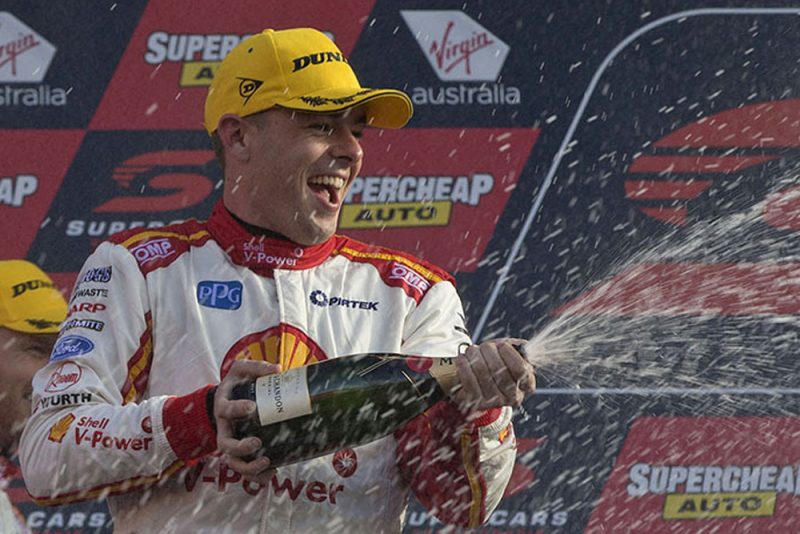 Shell V-Power Racing’s Scott McLaughlin described a maiden Supercheap Auto Bathurst 1000 podium ‘as something you dream about’ after a series of missed opportunities.

The New Zealander’s first Great Race rostrum arrived on his seventh attempt after making his debut in 2012 with Tekno Autosports.

Sharing duties with Alexandre Premat, the pair ended the race 9.4s adrift of race winners Craig Lowndes and Steven Richards, with the Frenchman leading a dozen laps in the opening third of the race.

“It’s something you dream about, a Bathurst podium and (I’ve) missed out a couple times. I guess to be close to the win, not that close, but it is nice to be right there.

“I probably picked a really cool one to be on.

“It was very special with Craig, and congrats to these guys because they drove a faultless race.

“It was something that I’ll cherish forever because that was very cool, on the podium with him.

“Look, as a Ford driver I got booed from pillar to post, so that was pretty interesting. I was close to calling them a pack of arseholes, but probably shouldn’t do that,” he joked while playfully nudging Steven Richards after finishing second to two Holdens.

The race was run at record pace, with David Reynolds breaking the lap record while winners Lowndes and Richards shattered the previous best race time by almost 10 minutes.

“I was mentally pretty drained and pretty sore from just throwing the thing around,” McLaughlin explained.

“Doing mid-sixes around here, flatout every lap, is tough. Then you throw in a bit of rain, a bit of moisture at some points, it was pretty interesting.”

Though the duo recorded a podium result, and led the race for a dozen laps in the first third of the race, it was far from a perfect day.

McLaughlin ran off the road at The Chase earlier in the race while Premat had his own moment at the corner later on, rejoining in the path of Chris Pither and Will Brown, both of whom narrowly avoided the Falcon.

There was also a delay in fitting a new brake rotor to the right front wheel when they stopped under Safety Car on lap 57.

“I think we had some little issue go wrong in the end in that last stint because I really suffered a lot at the end of the race,” McLaughlin reasoned.

“But absolutely awesome drive and then obviously we had the little rotor disc problem but as a team we’ll grow from this.

“I made mistake, Alex made mistakes, team made a couple We’ll learn from it, come back stronger and give it a red-hot go.”

The Supercars Championship continues at the Vodafone Gold Coast 600 from October 19-21.