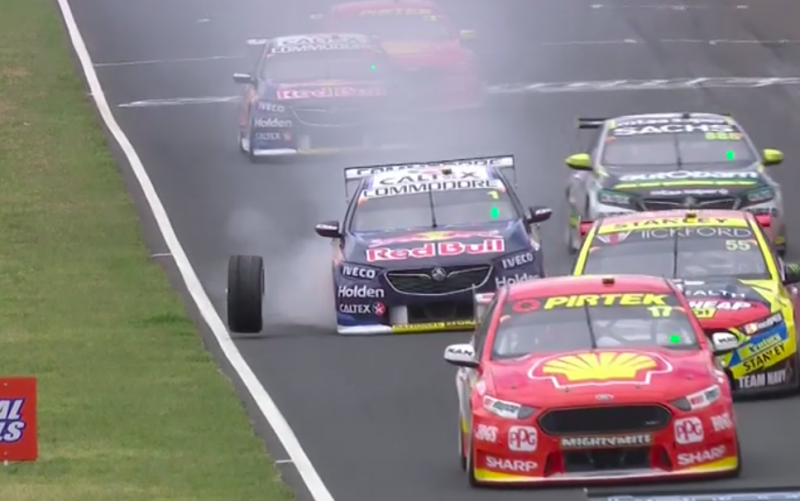 Co-driver Paul Dumbrell was at the controls when the right front wheel suddenly burst free from the car on the start/finish straight while occupying second spot on lap 40.

It is understood that a pin which helps hold the wheel to the hub was missing from the right front.

Dumbrell managed to bring the car back to the pits where repairs were completed to the wheel and splitter, dropping the entry almost two laps down.

Whincup, who started from second on the grid, dropped to fourth in the early laps before Dumbrell surged back to second behind the David Reynolds/Luke Youlden Erebus Holden.

“I think we have got a broken front right roll bar and few things which are a bit bent Anyway that’s Bathurst,” said Dumbrell.

“We have Jamie’s championship to think about so it is key for us not to make any mistakes and get the car on the lead lap, and then anything can happen.”

However, worse was to befall the Walkinshaw Andretti United Commodore of James Courtney and Jack Perkins which retired with an engine failure on lap 34.

The car became the first retirement when it ground to a halt on Mountain straight with Perkins at the wheel on lap 34, causing the first Safety Car.

“I don’t know, it was fine when I got out of it,” said Courtney.

“Massively disappointing for these blokes in here; we’ve still got one car in the race so put all that brain power into Scotty and Luffy and get those guys through.

“Definitely not the way we thought the day was going to go this morning.

The retirement arrived after Tickford duo David Russell and Chaz Mostert tangled at Forrest’s Elbow on lap 21 in the only other significant incident from the opening stages of the 161 lap race.