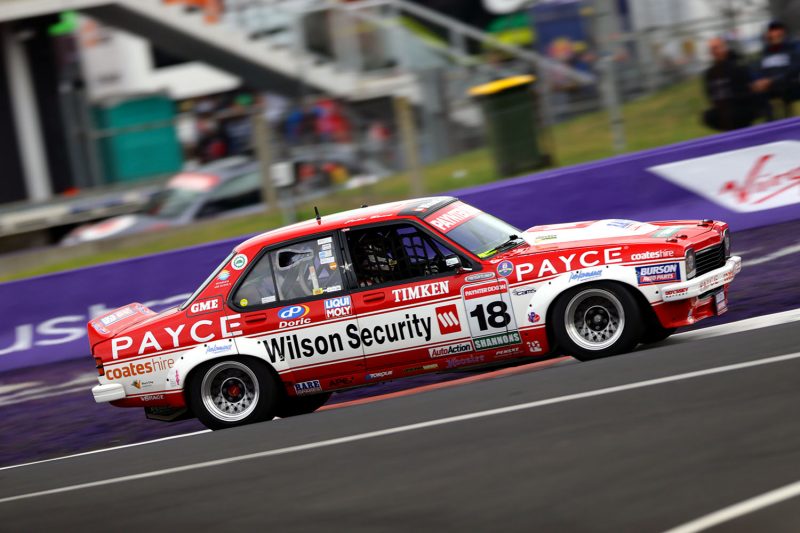 John Bowe beat Steve Johnson to victory in the final race of the weekend for Touring Car Masters at the Supercheap Auto Bathurst 1000.

Johnson (Ford Mustang) had the inside line for Hell Corner and stayed ahead of Bowe at the start, but it was Adam Bressington (Chevrolet Camaro) who made the best get away, diving up the inside of two cars and advancing to third momentarily.

Mark King (Chevrolet Camaro) then fought back and re-claimed third at Griffins Bend from the Camaro driver.

There was major moment at The Chase when Aaron McGill lost control avoiding a slow-moving Bressington on Conrod Straight, spinning sideways at high speed before the kink and ultimately beaching in the gravel.

A handful of other cars took evasive action, with Andrew Fisher and Brad Tilley running through the gravel but returning to the tarmac without getting beached.

The Safety Car was deployed for the recovery of McGill’s Ford Falcon, but on the Lap 4 restart, Allen Boughen (Mercury Comet) lost the rear on the exit kerb of Hell Corner and found the inside wall.

The race remained green, as second place Bowe came under pressure from Marcus Zukanovic (XD Falcon), but the Torana driver then pounced on Johnson for the lead up the inside at the first corner.

Jim Pollicina (Holden Torana) displaced Brett Youlden for fourth, with the pair side-by-side from Murray’s right through until Griffins Bend as Pollicina finally moved by in the closing stages.

The concluding round of the 2018 Touring Car Masters Series takes place at the Newcastle 500 from November 23-25.

Tim Brook won a Safety Car marred final race of the weekend for the Toyota 86 Racing Series after a heavy impact for invited driver James Davison.

Brook beat Jake Klein off the line and led the field up Mountain Straight on the opening lap, with Cameron Crick filing into second.

Dylan Thomas ran off the road at The Chase, but as he rejoined, the field checked up and James Davison made contact with the left rear wheel of the former’s car.

It sent Davison up on two wheels, coming to a halt on the racing line before Jaiden Maggs’ car swapped around on him in a separate incident and slammed backwards into Davison.

All drivers were able to climb from their cars under their own steam, with the Safety Car immediately deployed.

The race got going again with one lap remaining as Brook managed to gap Crick on the restart.

Further behind, Klein came under pressure from Luke van Herwaarde, who wasn’t able to complete the move, despite getting alongside on the exit of Griffins Bend.

Towards the end of the lap, van Herwaarde ran off the road at The Chase, dropping out of fourth and ultimately crossing the line 17th.

The Toyota 86 Racing Series heads to the Newcastle street circuit for its final round from November 23-25.