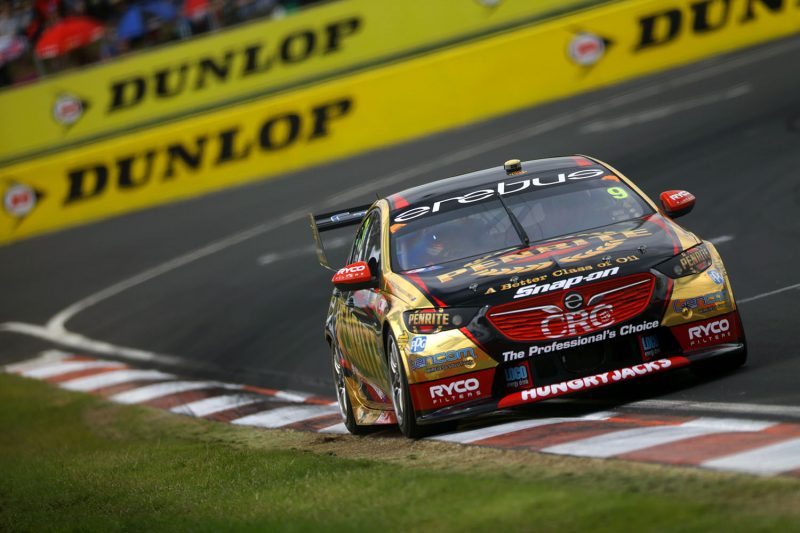 In the most dramatic moment of the race so far, the #1 Red Bull HRT ZB Commodore spat the right-front wheel out on the main straight at the start of Lap 40.

Dumbrell guided the car back to pit lane and the Triple Eight crew fitted a new wheel and splitter before sending him back out nearly two laps down.

The car controller could be heard saying, “The wheel clip’s gone completely,” while the car was in pit lane.

Dumbrell is currently back in the car in 21st position, the first off the lead lap, but has cast doubt on his and Whincup’s chances in light of the problem.

The pole-sitting #9 Erebus Penrite ZB Commodore has led for much of the race and Youlden currently heads Tony D’Alberto in Fabian Coulthard’s #12 Shell V-Power FGX Falcon which is slightly off-sequence on pit strategy by 1.93s after Lap 81 of 161.

Alexandre Premat is eighth in the #17 DJR Team Penske FGX Falcon (Scott McLaughlin) and Earl Bamber has not long fought his way back into the top 10 in the #97 Triple Eight ZB Commodore (Shane van Gisbergen).

Both cars lost time in the pits due to slow rotor changes while Premat just had a narrow escape when he ran off at The Chase and was nearly shunted by Chris Pither (#33 Wilson Security ZB Commodore, Garth Tander) on re-entry.

Reynolds made a clean getaway in Car #9 but Whincup didn’t quite get full traction and took up third position, behind Anton De Pasquale.

He ceded another position when Shane van Gisbergen rounded him up at Griffins, before the Kiwi broke up the Erebus one-two when De Pasquale locked up and ran off at The Chase on Lap 3.

Whincup, too, passed the #99 Penrite ZB Commodore at The Chase a lap later, but in more textbook circumstances.

Tander had made a demon start to go from 10th to fifth by the time the field arrived at Hell Corner, but had been under pressure from McLaughlin ever since and the leading Ford man got by when Tander ran wide at Hell Corner on Lap 15.

De Pasquale was among the first into the pits on Lap 16, but Will Brown returned four laps later in Car #99 to observe a mechanical black flag for the passenger door hanging open.

The Erebus crew had in fact attempted to tape the door shut at the first stop and applied more to hold it in place.

Two Tickford cars came together at Forrest’s Elbow on Lap 21, just as the first pit stop cycle was ending.

Mostert, who had just taken over Car #55, came down the inside of David Russell.

While Russell appeared to have left room, Mostert glanced the inside wall and tagged the #6 Monster Energy FGX Falcon, which fired it hard into the outside wall.

Russell couldn’t make the left-hander at The Chase but drove out of the gravel and barely made it back to the pits.

Primary driver Cameron Waters was seething about the incident.

Stewards reviewed the incident but decided it warranted no further action.

Car #9 continued to lead by around four seconds, then in the hands of Youlden as most entries had switched primary drivers to co-drivers.

However, with his lead halved by then, Youlden locked up and ran over the edge line at Hell Corner on Lap 28.

The error invited both Red Bull HRT cars to attack up Mountain Straight but in the end it was Dumbrell who made an opportunist move up the inside of Bamber at Griffins.

It prompted the entire field, but for the #78 Harvey Norman Nissan Altima which had just been in, to take a second pit stop.

Dean Fiore ran off on his own at Hell Corner shortly after the restart and glanced the wall, causing the #23 Industrial Athlete Nissan Altima he shares with Michael Caruso to ultimately go a lap down.

The drama for Car #1 soon followed.

The first effective lead change came on Lap 45 when Premat dived past Youlden at Murray’s having shaped for a move moments prior at The Chase.

The Frenchman got out to a 1.7s lead in the next five laps, during which time Coulthard took a third pit stop.

That decision put Car #12 back in front but slightly off-sequence when the third cycle completed at the end of Lap 59, but drama in and around the pits saw the order behind him change.

Premat had been leading comfortably but was jumped by three of the four cars that followed him into pit lane due to a slow rotor change.

The other car was #888, which Richards drove off the road at pit entry, but eventually managed to get into the lane proper.

The isolated showers around the mountain end of the circuit were not enough to convince anyone to switch to wets.

Coulthard handed the lead back to Reynolds when he pitted at the end of Lap 68, with D’Alberto into Car #12.

McLaughlin survived on off at The Chase just as that was going on, just missing the wall.

Rain at the top caused nervousness but soon cleared, before a second Safety Car was called for debris on Lap 76.

Youlden led the field to the green flag on Lap 79, at which time Bamber was all the way back in 16th.