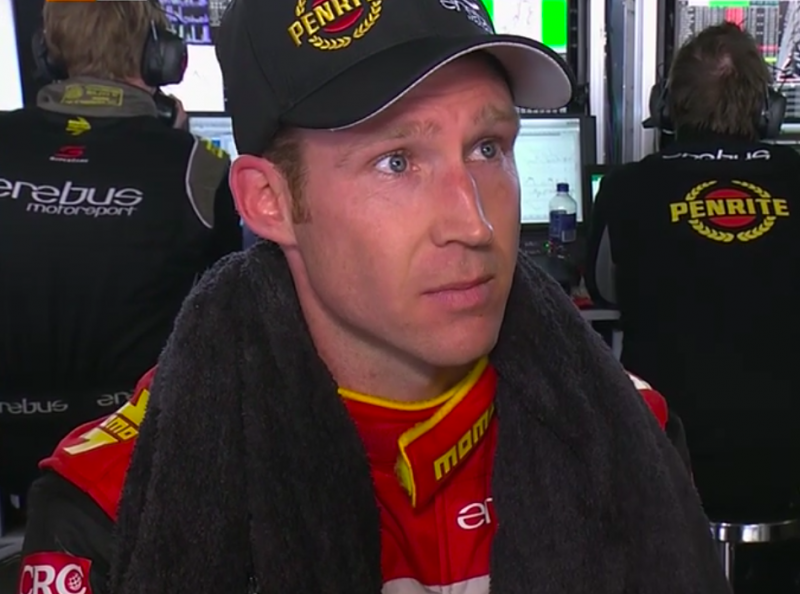 Leg cramp in the final stages of the Supercheap Auto Bathurst 1000 has cruelled David Reynolds’ and Erebus Motosport’s hopes of a stunning back-to-back Great Race triumph.

Reynolds and Luke Youlden had dominated the race from pole position and appeared to be in the box seat to take out an impressive win as the race entered the final 30 laps.

However, hopes of defending their Bathurst crown were dealt a blow when Reynolds reported cramp in his right leg while being chased by Craig Lowndes in the Autobarn Lowndes Racing entry on lap 135.

As the two cars came over the rise on Mountain Straight, Lowndes passed the struggling Reynolds to take the lead.

Reynolds dropped back before pitting for what should have been a final stop, where he took on an electrolyte supplement to help ease his cramp.

Unfortunately in that pit stop the car’s rear wheel were spinning, triggering a pit lane penalty that ultimately put them out of contention.

Still battling cramp Reynolds pitted again to hand over to Youlden to bring the car home to the finish.

A visibly distraught Reynolds admitted his body had given up.

“Mate, so, so devastated. We had the fastest car all day, and then my leg was cramping big time,” said Reynolds on the telecast.

“When Lowndes passed me, I was at like 50 percent throttle; I couldn’t tell if I was on the brake or the throttle. I’ve never had that before in anything I’ve ever driven. Just bizarre my friend.

“Even the first, probably 15 laps, I wasn’t mentally there. Just lost. And then, my body gave up after that… I’m just so disappointed for everyone involved. We had the best car. I just can’t believe it.”

“He was just getting cramps. I think it’s all just a mixture of long days, lots of commitments, not much sleep. He expected to do a triple stint and just hasn’t been able to survive it,” said Ryan.

“Knowing we could get electrolytes into him – he’s got his fitness advisor here and she said that he can drink a lot of it, should get rid of the cramps. We decided to leave him in and have a crack at winning the race.

To make matters worse for Erebus Motorsport its sister car driven by Anton De Pasquale and Will Brown found the wall at Reid Park before then finding the barriers at McPhillamy Park on lap 140.

The entry had started from third but their race unravelled early on when they were black flagged for a flapping passenger door.