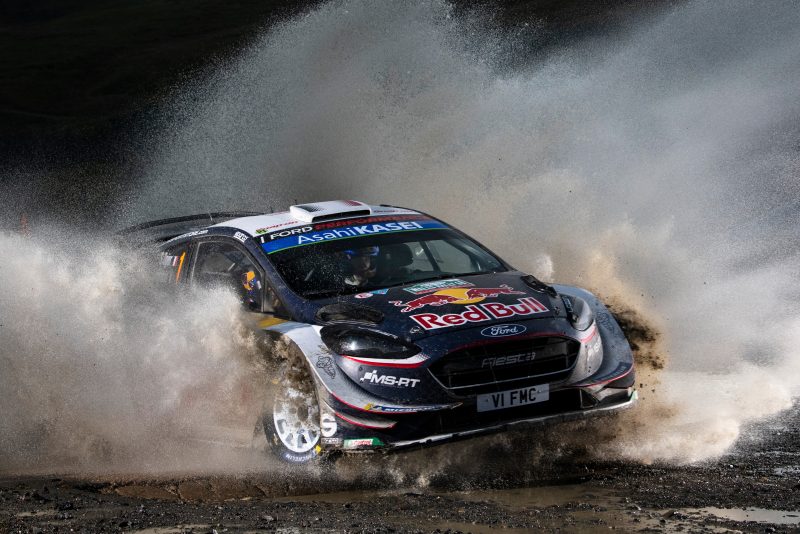 Ogier now has a golden opportunity to make up ground in the World Rally Championship given that Thierry Neuville is back in eighth after an error early in the morning.

Tanak had dominated the first full day of Round 11 in Wales, won Special Stage 12, and was 41.9s up on second-placed Ogier after the sixth stage of Saturday.

However, his Yaris came to a halt 3.7km into the next stage and the Estonian pulled off the course.

Toyota Gazoo Racing team principal Tommi Makinen was not sure of the cause of the failure.

“I think he first lost the sump guard and then broke the radiator and the water pressure is gone. It is a big disappointment.”

Ogier, who spun twice on Friday and lost two gears, won the day’s first test and was second after Neuville’s mistake on the stage, before also taking out Special Stage 15.

It meant that he was there to pick up the pieces when Tanak dropped out, but has another Toyota Gazoo driver in Jari-Matti Latvala 4.4s behind.

Latvala was fastest in SS14 and SS17 and trailed Ogier by less than six seconds for the duration of Saturday running.

Neuville started the day in second position overall but held that for only one more stage before sliding his Hyundai into a ditch on the first run through Sweet Lamb Hafren.

Spectators pushed the championship leader out of the hole but his deficit to the leader blew out to over 80 seconds.

The exit of Tanak pushed him closer to the lead and he is now 55.5s back from Ogier.

“Our targets for today were completely overturned after our off early in the morning loop,” said the Belgian.

“The grip level caught me out and I went off. It’s part of the game when you are pushing as hard as we do all the time.

Esapekka Lappi (Toyota Gazoo Racing) and Craig Breen (Citroen) are within 13.5s of the lead in third and fourth respectively.

Andreas Mikkelsen climbed from ninth after Friday to head into the final day in sixth position off the back of three stage wins in his Hyundai.

Sunday action begins at 1722 AEDT with five stages to conclude the rally.

Unusually, the Power Stage, Gwydir, is the second stage of the day.