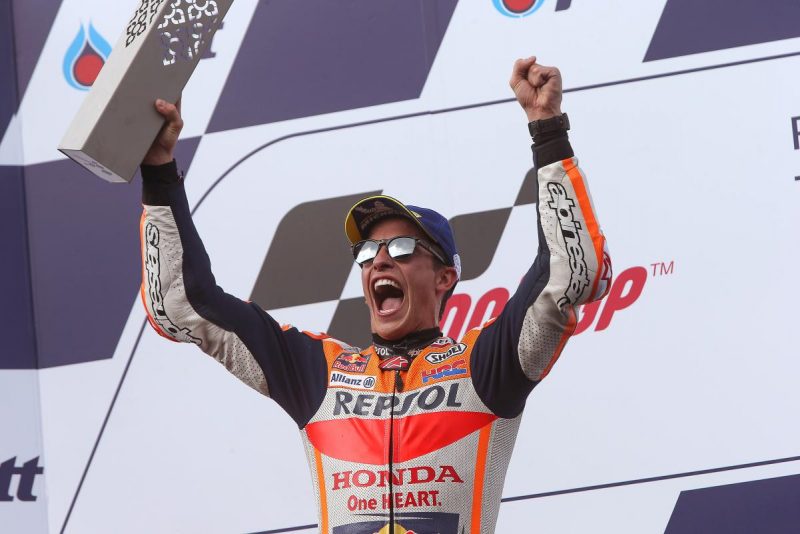 Marc Marquez has edged closer to another MotoGP championship with a last corner victory over Andrea Dovizioso at the inaugural Thailand Grand Prix.

In a highly competitive finish, Repsol Honda’s Marquez took the lead from Ducati Team’s Dovizioso at Turn 5 of the final lap, only for Dovizioso to slid down the inside at the final corner.

In wasn’t to be for Dovizioso, though, with Marquez using better exit speed to reach the line with a slender 0.115s gap, securing his seventh win of 2018.

With just four rounds remaining and a maximum of 100 championship points on offer, Marquez now holds a 77-point lead over Dovizioso.

From pole, Marquez led the opening laps before Valentino Rossi took the advantage, and held sway until Dovizioso swooped in.

Dovizioso would lead the majority of the race until the final five laps where Marquez mounted a real challenge.

The Spaniard tried a number of passing attempts, all of which failed and allowed the Movistar Yamaha pair of Maverick Viñales and Rossi to make it a four-way battle.

Marquez eventually took the lead at Turn 5 on the final lap and withstood the last-corner dive to secure a great win.

Fifth place looked set to go to Dani Pedrosa (Repsol Honda), who had held the place until Lap 19 when he crashed out.

The next round of MotoGP is the Japanese Grand Prix at Twin Ring Motegi on October 19-21.