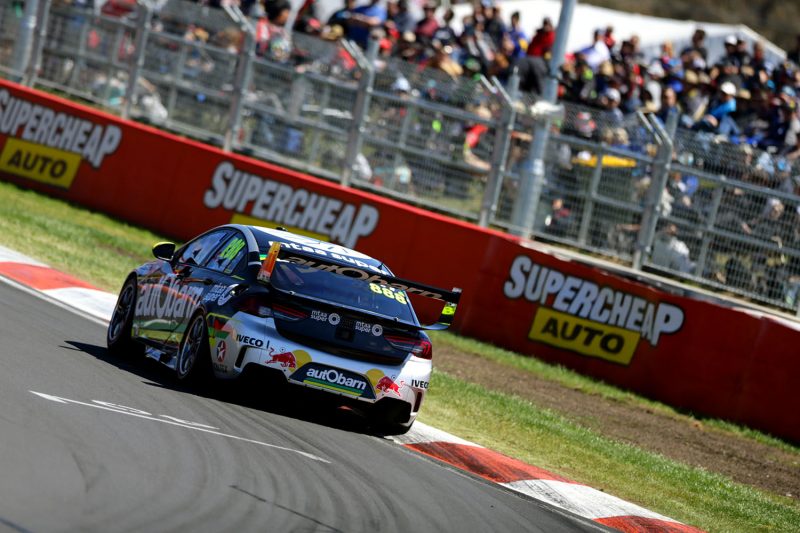 Craig Lowndes has described the feeling of the cool down lap of what is likely his final Bathurst Shootout lap as ‘really special’.

Lowndes made the Armor All Top 10 Shootout for the first time since 2014 in what is his last year as a full-time driver in the Virgin Australia Supercars Championship.

While he will remain at Triple Eight Race Engineering in a co-driver capacity, it is likely that whomever he partners out of Jamie Whincup and Shane van Gisbergen will qualify the car for the Pirtek Enduro Cup races.

As such, his dash for pole was likely the last time that the six-time Supercheap Auto Bathurst 1000 winner had Mount Panorama all to himself, and the crowd responded on his cool down lap.

“You sort of see the crowd and hear the crowd; it was really special and I think tomorrow (Sunday), even when we do the parade lap it will be really nice,” Lowndes told Speedcafe.com of the cool down lap.

“Sad to think this will be the last full-time as a main driver and potentially probably the last time I qualify here, depending on who I’m with and what’s going on. We’ll have to see.

Lowndes was one of two drivers to drop three positions relative to his provisional qualifying result, and will subsequently line up ninth for the Great Race.

The veteran said that a persistent steering problem in the #888 Autobarn ZB Commodore which reared its head again in Practice 6 earlier in the day distracted the crew from set-up work.

He was convinced that the problem, which led to two steering rack changes and was also attributed to the power steering pump, pressure relief valve, and a kinked hose, had finally been resolved.

“It wasn’t (the position we wanted),” admitted Lowndes.

“We went into the top 10 sixth, came out ninth. It’s disappointing; I would have loved and preferred to have been on row three, but it’s one of those things.

“We’ve been playing around and finding a power steering issue all weekend. That side of it I can finally say that we fixed, so that’s a good thing.

“The set-up of the car has probably been neglected a little bit because of this issue.

“We’ve been sort of basing it off next door, the Red Bull cars, and it wasn’t quite nice (in terms of) the flow across the top of the Mountain.

“It was good in that last sector which is where we’re really strong, which is great; just didn’t quite get what we wanted.

“Anyway, we’ll obviously re-group, but still a much better starting position this year than last year. Not too disappointed.”

He was also confident that Car #888 could challenge for victory.

“Now we can think about what we can do to the car set-up overnight, we’ll re-group and make sure that we get a real speedy race car,” he added.

“(Co-driver Steven Richards is) 90 percent happy, I suppose no driver is 100 percent happy, but he’s confident still and happy that we fixed the steering problem and now we can really focus on the car.”