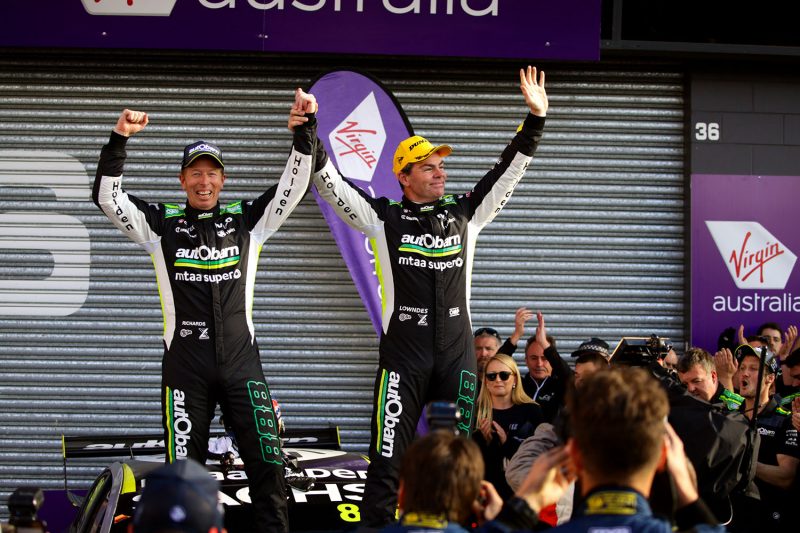 Craig Lowndes suggests victory in the 2018 Supercheap Auto Bathurst 1000 ranks a close second behind his 2006 win that closely followed the death of mentor Peter Brock.

Lowndes and co-driver Steven Richards won the race in record time ahead of Scott Pye and Warren Luff, marking an emotional conclusion to his full-time career at Mount Panorama.

It was the 43-year-old’s seventh victory in the iconic event, branding it next best after his 2006 victory.

“’06 is sort of the special one because of the emotions that went behind it, but this is definitely right up there,” Lowndes said.

“It’s (2018) probably the second best because now I know we’re not going to be a full-time driver next year and these guys can all battle it out.”

The result prompted questions that Lowndes could go on to match or even better his late mentor’s record of nine Bathurst 1000 victories.

“Roland actually said I’m good enough for another five years and I’ve only got a contract for one, so hopefully I can put pen to paper and get those extra four,” he joked.

“But whether I pair up with Jamie or Shane, I think that next year’s combination will be strong.

“You never know what happens around this place. It’d be nice to try and get nine, yes.”

“It’s going to make a pretty awesome combo, whoever he is with next year isn’t it?” Dane said.

“Honestly, you know what it’s like; if you get your timing right and Craig has got at least another five years of co-driving at this joint.

“And what’s he got to do, another two Bathurst 1000s to equal Peter? I’ve got a sort of sneaking suspicion that he’ll do it. I can’t wait to be a part of that.”

Dane also agreed with Lowndes’ thoughts on the win, suggesting that it shared similarities with the emotional 2006 event.

“To be honest, I haven’t been this emotional since ’06. Seeing the old bugger get another one and Richo, he knows full well tonight that all the old stories from when he was very young will come out!

“Be absolutely clear about that. I had to bullshit my way into his life in the end of ’04 to get him to come and sign for us and promise him the world and make sure I didn’t deliver him an atlas.

“But I think we’ve done our side and Craig has more than well done his side and it is unbelievable to hear the support that he got here.

“I mean, the crowd started going off with about five (laps) to go. Jesus, calm down, calm down, it’s not over until it’s over! It’s unbelievable to hear the level of support.

“And of course, Richo and his father have got such a track record here and such a following here as well.

“Luckily Steven hasn’t called them any nasty names here, but the collective is such a Bathurst story and for me to come over here 15 years ago and be a part of it is special.”