Brake disc change could be a Bathurst race changer

Brake disc change could be a Bathurst race changer 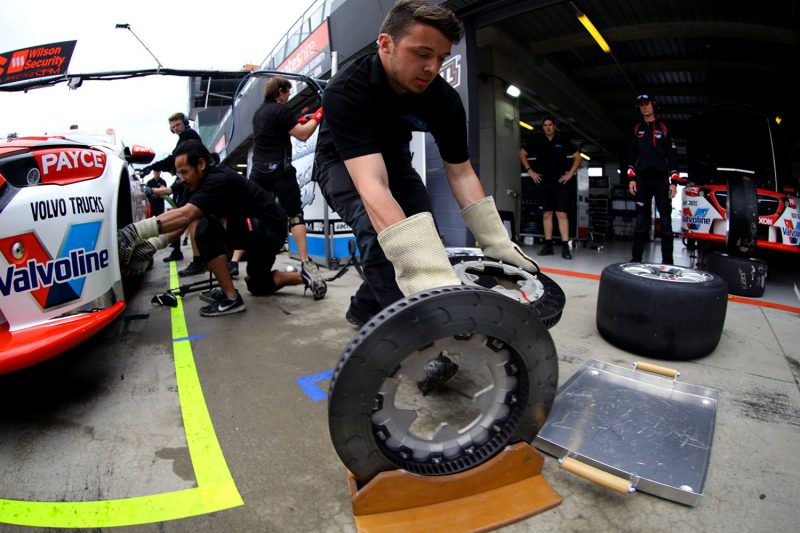 The introduction of a mandatory brake disc change could prove a deciding factor in today’s Supercheap Auto Bathurst 1000.

Supercars has moved to bring in the rule for this year to prevent brake disc failure that have featured in previous editions of the Great Race.

It will mean that in today’s race each entrant will now have to complete a brake rotor change in the heat of battle.

The new variable has led to teams allocating significant resources to developing mechanisms to speed up the process during pit stops as outfits aim to complete the change under 30 seconds.

Yesterday saw teams focus on perfecting the craft with many encountering issues in completing the change swiftly.

It is anticipated that issues could arise in today’s 161 lap race.

Triple Eight team owner Roland Dane believes the variable could prove critical in deciding the outcome of the race.

“One hundred percent, (if) you slip up on it could absolutely be a race changer,” Dane told Speedcafe.com.

“The lack of familiarity with doing it in the heat of the moment when the cars are hot for everyone, was shown up by the fact that almost nobody got both wheels or rotors on at the same time.

“Anytime they’re not finished within the same second then they’ve left something on the table. It’s a new thing for us to be under that pressure.”

Further down pit lane Erebus Motorsport heads into the race confident that it has the procedure nailed.

The operation will start the race from pole and third after David Reynolds and Anton De Pasquale lit up the timing screens in the Top 10 Shootout.

“There’s no reason to think that’s a risk, we’d do two if we had to. We are 100 percent confident with that.

“All the practices we’ve done, we haven’t been over our fuel time, even with slight mistakes.”

The brake disc change is likely to be one of several key factors in the race including the weather with forecasters predicting scattered showers for the Mount Panorama region.

The Supercars field will head out for one final Warm Up at 0805 local time/AEDT before the Great Race which begins at 1110.