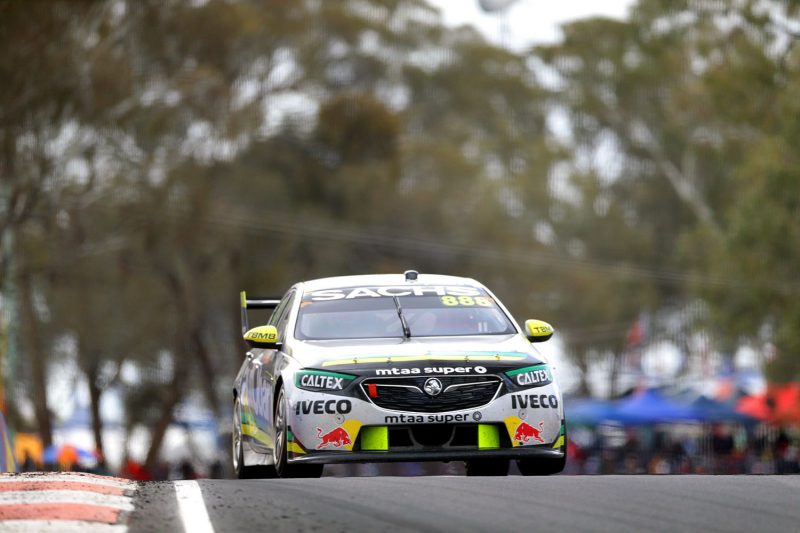 The #888 Triple Eight Holden of Craig Lowndes and Steven Richards

Craig Lowndes’ and Steven Richards’ Supercheap Auto Bathurst 1000 win has moved them into the lead of the Pirtek Enduro Cup standings.

The veteran pairing picked up 258 points by finishing third in the Rabble.Club Sandown 500 before adding another 300 in the Great Race.

Lowndes and Richards are the only drivers to finish on the podium in each of the first two races of this year’s Pirtek Enduro Cup.

Trailing them by 60 points is fellow Triple Eight pairing Shane van Gisbergen and Earl Bamber, who remain second after finishing fifth in Bathurst.

They are tied with van Gisbergen’s Virgin Australia Supercars Championship title rival Scott McLaughlin and French co-driver Alexandre Premat, who stood on the final step of the podium at Mount Panorama.

Bathurst runners-up Scott Pye and Warren Luff are fourth, one position ahead of Jamie Whincup and Paul Dumbrell.

The Sandown victors slipped to fifth after Car #1 shed a wheel on Lap 40 and dropped off the lead lap, before they clawed their way back to 10th.

Last year’s winners Chaz Mostert and Steve Owen are sixth and 22nd respectively in the series within a series, having been split for 2018 after a shuffle of Tickford Racing’s co-driver ranks.

A Triple Eight combination has won the Pirtek Enduro Cup three times out of the five years since it was instituted in 2013.

Lowndes won the inaugural edition with Warren Luff, the same year in which Richards won the Bathurst 1000 for a third time as co-driver to Mark Winterbottom at Tickford.

The final two races of the Pirtek Enduro Cup are the twin 300km affairs at the Vodafone Gold Coast 600 on October 19-21.