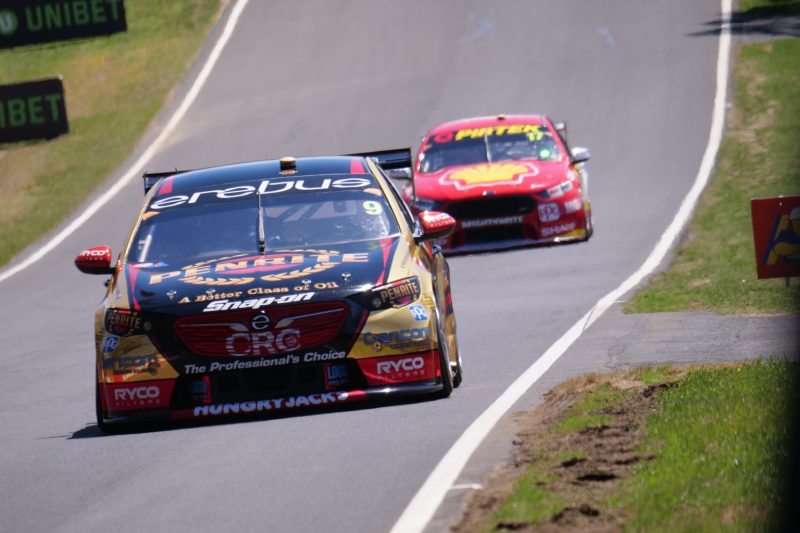 David Reynolds has topped the final practice session for the Supercheap Auto Bathurst 1000 while Scott McLaughlin and Scott Pye both barely escaped what could have been major crashes.

In a Practice 6 largely bereft of the usual Armor All Top 10 Shootout simulations, Reynolds (#9 Penrite ZB Commodore) set the pace with a 2:04.4072s approaching the halfway mark.

Anton De Pasquale (#99 ZB Commodore) improved his personal best after the chequered flag to give Erebus Motorsport a one-two ahead of their twin Shootout attack this afternoon, while Cameron Waters’ first-up flyer was enough to put the #6 Monster Energy FGX Falcon third, and the last in the fours.

“I think Luke was doing some (race) runs then,” said Reynolds.

“My job today is just the Top 10 Shootout. I woke up this morning at about 10 (minutes) to four doing qualifying laps in my head so I’m a little bit tired.

“The tyres I was on there were from the start of the year, so they were probably a little bit harder. They just weren’t quite there the whole lap, but the time’s still there.

“When I get a current batch of tyre, I think I’m going to go a bit faster.”

Waters was one of three to very nearly bend their cars during the hour-long session while Pye had two close calls.

McLaughlin broke into a huge slide when he got loose over the hump at the exit of The Cutting in the final five minutes.

He kicked up the dust against the wall but managed to just avoid putting a mark on the #17 Shell V-Power FGX Falcon.

“I thought I was in to be honest; more arse than class saving that one,” quipped the Kiwi.

“Just got caught up, I was trying to change the brake bias, on the bump I was just a bit wider than I wanted to be; yeah, just took off on me.

“Everyone says you have a moment once or twice around this place all weekend, so hopefully that’s one of them.

“The intention was to get a feel for it; unfortunately, I just made that little mistake.

Waters did get the wall at the very end when he just brushed the concrete at McPhillamy Park, but brought the black Tickford Ford back to pit lane without apparent ill effects.

Pye (#2 Boost Mobile ZB Commodore) had almost done the same a few minutes earlier, after a major sideways moment at the rockface on the climb to the Cutting, 10 minutes in.

The #14 Freightliner ZB Commodore was in the wars early on when Ash Walsh pinched a brake and nosed into the tyre wall, bringing out the red flags in the 13th minute.

The car’s primary driver, Tim Slade, caused a second stoppage when he became beached at Hell Corner at the half-hour mark.

There were more steering problems at Triple Eight, with the #888 Autobarn Lowndes ZB Commodore again undergoing a rack change after steering heavy at The Grate and Forrest’s Elbow.

Co-driver Steven Richards was reportedly unconvinced that the issue had been fully resolved after he went back on-track.

Teams practiced rotor changes ahead of the first Bathurst 1000 in which they will be compulsory.

Percat nevertheless moved up to fourth on the timesheets with a 2:05.0075s near the end of the session.

The session was held in sunshine, and the increase in temperatures was said to make track conditions more difficult.

“Just a bit of a change in the balance.”

The bottom 16 cars on the grid now do not return to the track until tomorrow morning’s Warm Up session.

For the rest, the Armor All Top 10 Shootout starts at 1710 local time/AEST.