Reynolds on Bathurst pole by less than a hundredth

Reynolds on Bathurst pole by less than a hundredth 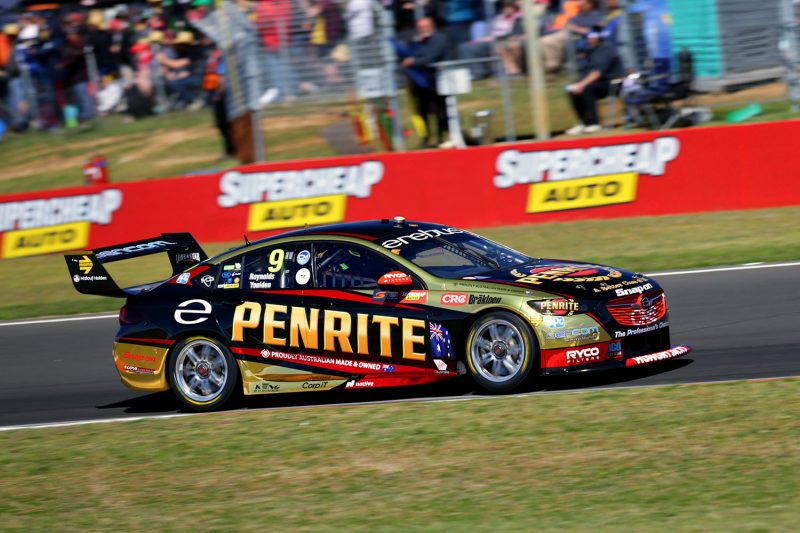 David Reynolds has qualified on Armor All Pole Position for the Supercheap Auto Bathurst 1000 after Jamie Whincup came up less than a hundredth short on the final lap.

Whincup did, however, break up what stood as an Erebus Motorsport front row lockout after a highly impressive lap from Anton De Pasquale.

The rookie was the second man onto the Mount Panorama Motor Racing Circuit but set a lap good enough to elevate himself from ninth after Friday qualifying to third.

Reynolds barely missed the threes after he only just made the left-hander at The Chase in the #9 Penrite ZB Commodore.

However, he was lightning quick to the first sector, almost three tenths better than his team-mate’s then-benchmark, and set what would be the ultimate pole time at 2:04.0589s.

It is Reynolds’ second pole at Bathurst after doing so in wet conditions in 2015.

“My young team-mate did a pretty amazing time so I couldn’t let him beat me.

“I had to go a couple of tenths down the road. I threw everything at it, that’s all I had left.

“I was replaying how I was going to get the extra couple of tenths at four o’clock this morning.

“My car was amazing, our cars are so fast. I think we’re first and third. The team has done a brilliant job.

“He (De Pasquale) did a four-three and I was stressing out; ‘I don’t know if I can go that fast’.

“I got my tyres up and pushed up, my thing was amazing.”

Whincup gave up 0.3701s to Reynolds in the first sector but halved that deficit across the top.

He then put in the fastest final sector of the session but fell 0.0094s short in the #1 Red Bull HRT ZB Commodore.

De Pasquale had wheeled the #99 ZB Commodore to a 2:04.3498s despite leaving some lap time on the table with a small slide through The Chase and an untidy exit from Murray’s Corner.

“It’s very stressful,” he said after the session.

“Obviously, the lap felt good, I wasn’t too sure it was going to be as good as third, but once you started passing some guys in the garage it got quite hard at the top.

“Overall, I’m quite happy. For me, starting third, my second ever enduro, I’m stoked.

“We’re going to have a big think of it tonight and long, long day tomorrow.”

The next six drivers could not beat the time.

Shane van Gisbergen (#97 Red Bull HRT ZB Commodore) gave up nearly four tenths to De Pasquale through the first two sectors and could only halve that margin down Conrod Straight and into the final corners to log a 2:04.5385s.

Scott McLaughlin was three tenths slower than De Pasquale to Sector 1 but the fastest man across the top.

He then went ever so slightly wide of the ideal line at The Chase and set a 2:04.5494 in the #17 Shell V-Power FGX Falcon to qualify fifth.

Cameron Waters (#6 Monster Energy FGX Falcon) used all the road at Griffins and The Cutting but missed the apex at The Chase on his way to a 2:04.7517s, second-fastest to De Pasquale at the time.

Nick Percat, whose lap followed De Pasquale’s, had a slight wiggle on the run to The Cutting on his way to a 2:04.7673s in Brad Jones Racing’s #8 Repco Authorised Service ZB Commodore.

James Courtney (#25 Boost Mobile ZB Commodore) was the then-second-fastest to the first sector but was slow across the top and kicked up the dirt exiting the right-hander out of The Chase to set a 2:05.0034s.

He will start from eighth, a grid position from which the Bathurst 1000 has never been won.

Craig Lowndes was slow through the first and second sectors but found time in the third to go to a 2:05.0835s in the #888 Autobarn Lowndes Racing ZB Commodore.

“Not really (happy) to be honest,” said Lowndes shortly after crossing the control line.

“We’ve been fighting this steering problem (for) the last couple of days.

“We fixed it, that’s the good thing, but the car balance was just quite right across the top. Something we’ve got tomorrow morning to work on.

He will start his final Bathurst 1000 as a primary driver from the back row of the grid alongside Garth Tander (#33 Wilson Security ZB Commodore), who was first car on-track and set a 2:05.1717s after a loose exit from Hell Corner

The full Virgin Australia Supercars Championship field is due on-track again tomorrow at 0805 local time/AEDT (daylight savings) for Warm Up.