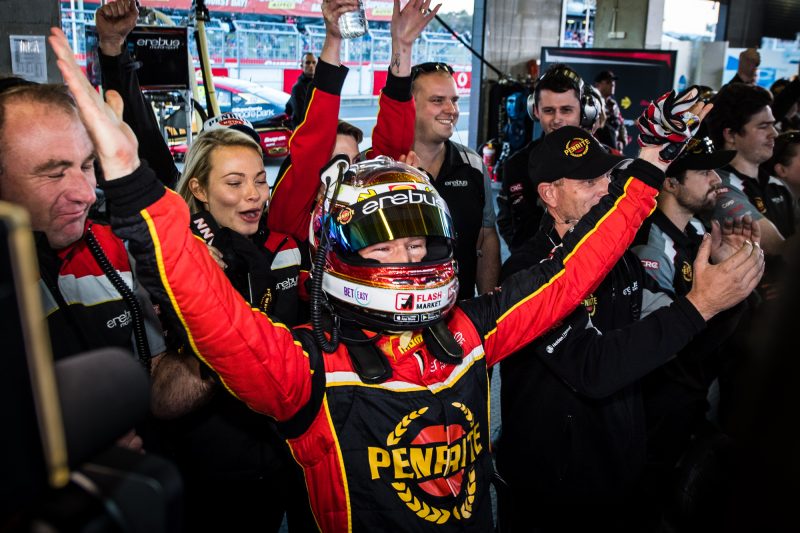 David Reynolds has described the lap which saw him claim pole in the Armor All Top 10 Shootout as a ‘controlled explosion’.

Reynolds recorded a 2:04.0589s, the second fastest lap ever recorded by a Supercar around Mount Panorama, to lead a one-three for Erebus with team-mate Anton De Pasquale third.

It followed qualifying on Friday afternoon which saw the 2017 Supercheap Auto Bathurst 1000 race winner log the second fastest time with a 2:04.2648s to book his place in the Shootout.

“It was controlled kamikaze, controlled explosion,” Reynolds said of his pole winning lap.

“That’s as fast as I can go. Every lap you do here, it’s not perfect but you maximise what you’ve got and I think I did the best job I could.”

While the best lap he was capable of, Reynolds suggests it was still riddled with mistakes.

The two-time race winner in 2018 admitted he was anxious heading into the session, having lost sleep overnight in anticipation of his lap.

The pressure then only increased when team-mate De Pasquale recorded a 2:04.3498s, a time that remained fastest until Reynolds’ run.

“I’ve been putting pressure on myself all day,” Reynolds admitted.

“I woke up this morning at like four o’clock doing laps in my head, stressing out. I had anxiety, everything.

“Then got in my car, pulled me socks up before I got in, tightened me belts, jumped in the car, and just let it happen.

“Our cars have been phenomenal since we rocked out of the truck. It’s a credit to the team. We stuck by our plan.

“The guys at the engineering group have done a bang up job on both our cars, we’re one and three. This is an epic day for us.”