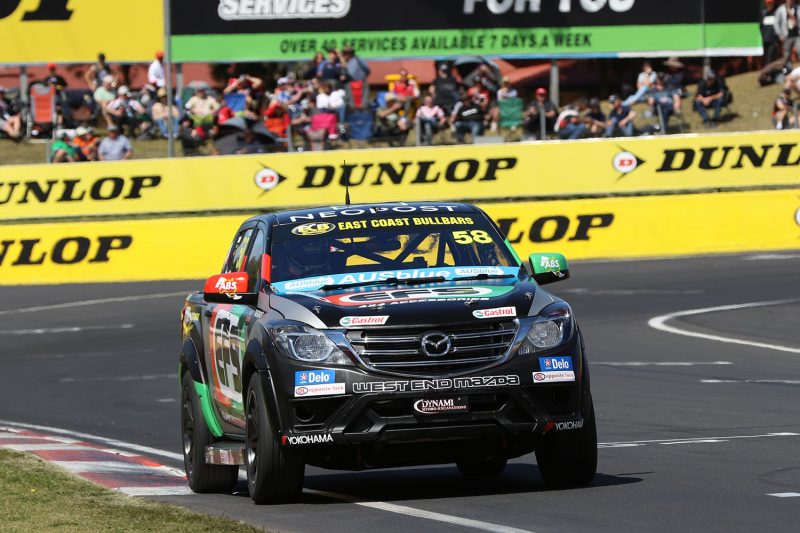 The #58 Peters Motorsport Mazda BT-50 was unchallenged after the first two corners of Race 3 as Craig Dontas again came home in second and David Sieders climbed to third.

Harris and Dontas started alongside each other at the front of the field by virtue of earlier results and the latter ranged up on the former’s outside as they approached Griffins for the first time.

Dontas filed back in and had a lonely race to second as the #87 Sieders Racing Team Mitsubishi Triton, which was taken to Armor All Pole Position a day earlier, finished 4.67s back from the lead Mazda.

By contrast, four cars battled for the next couple of positions during the six-lap affair.

Ben Walsh started third but was swamped up Mountain Straight on Lap 1 when he couldn’t slot third gear in the #8 Western Sydney Motorsport Toyota Hilux.

David Sieders saw off that challenge and set about hounding Tom Alexander, passing the #22 Ross Stone Racing Holden Colorado as they dropped from the hump towards Griffins Bend on Lap 5.

Alexander held fourth until the end, ahead of Walsh and Cameron.

Charlotte Poynting took the chequered flag in 12th despite losing the rear of the #52 Western Sydney Motorsport Toyota Hilux at the end of Skyline and spinning into the tyre wall at The Esses on Lap 5.

Tomas Gasperak’s #18 Team 18 Holden Colorado was again hit by mechanical problems and the teenager did not finish.

Harris’ win consolidates the series lead which he reclaimed earlier in the day, ahead of Round 7 at the Vodafone Gold Coast 600 on October 19-21.