Harris comes from back to win SuperUtes Race 2

Harris comes from back to win SuperUtes Race 2 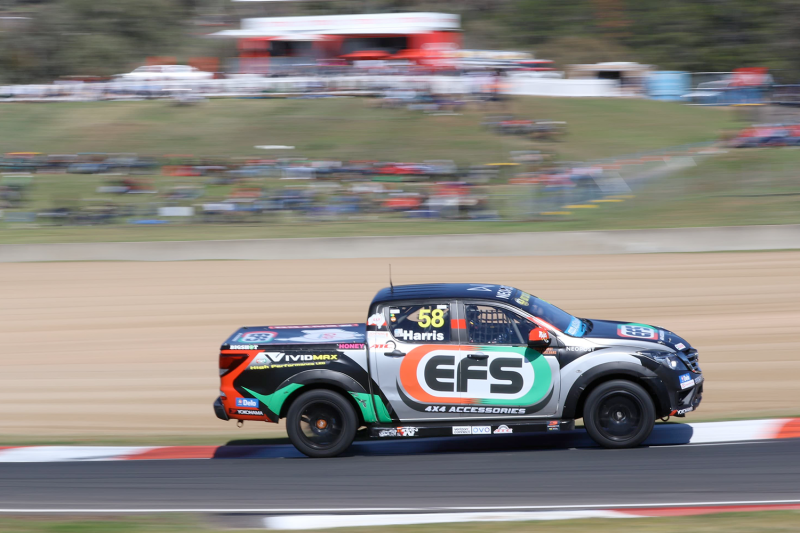 Ryal Harris has overcome a full reverse grid to win SuperUtes Race 2 at Mount Panorama and take over the series lead.

Craig Dontas drove from next to Harris on the grid to finish runner-up for the second day in succession, while Ben Walsh finished third and former series lead Craig Woods fourth.

All 12 finishers from Race 1 were inverted but Harris made light work of that challenge as he picked off five on the opening lap.

He benefited from a battle between Craig Woods and Christopher Formosa which caused Kim Jane and David Sieders to check up on their entry to the main straight, passing the latter two into Hell Corner at the start of Lap 2.

By the time the field got to The Chase again, he had blazed past Matt MacKelden to move into second position.

The #58 Peters Motorsport Mazda BT-50 was in the lead after barely more than two laps when Harris got by Mick Sieders at Hell Corner.

Dontas took a little longer to thread his way through in the #87 Sieders Racing Team Mitsubishi Triton but closed back in to within a second of Harris on the final lap.

Another couple of laps may have made things interesting, but it was Harris by almost 0.9s when the chequered flag flew, as scheduled, after six laps.

Walsh showed impressive pace on his way to third in the #8 Western Sydney Motorsport Toyota Hilux, ahead of team-mate Woods (#64 Hilux).

David Sieders (#34 Ranger Racing Ford Ranger) was fifth after surviving a wild battle on Lap 2 when five cars arrived at Reid Park together, bumping doors and tailgates at The Tree.

Mick Sieders, who started from first position, appeared to lack pace in the #45 SRT Triton and made matters worse when he ended up on the grass and glanced the wall at the entry to The Chase on Lap 5, with David Sieders on his inside.

He survived to finish ninth, while Kim Jane (#1 Steve Wilson Racing Isuzu D-Max) and Tomas Gasperak (#18 Team 18 Holden Colorado) were retirements, the former due to a recurrence of turbo problems.

The final race of the weekend starts at 1255 local time/AEST.