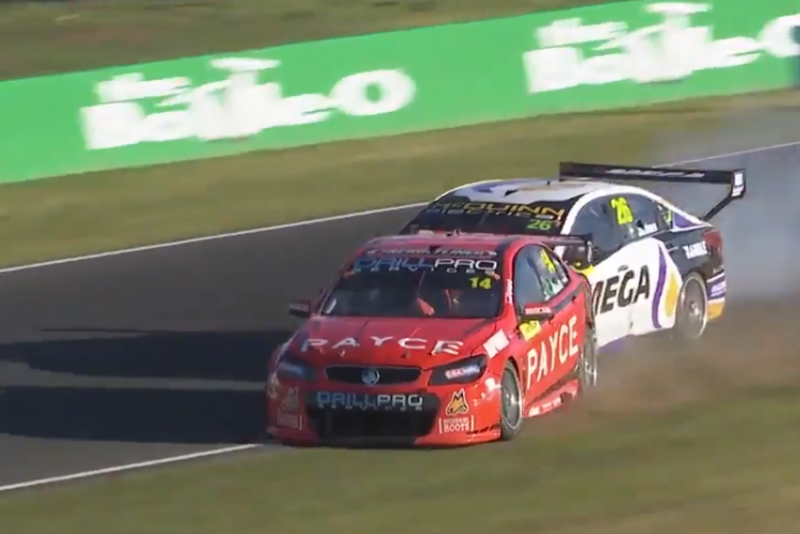 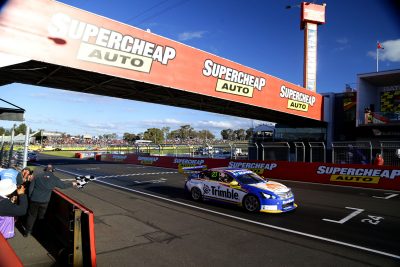 Dean Fiore has won a carnage-filled Bathurst 250 which climaxed with the top two coming together and going off at The Chase in a one-lap dash to the chequered flag.

Jones broke into a big wobble as he turned into the fast right-hander, perhaps caught out by dirt which had been left on the circuit, and was in turn shunted by Jacobson.

Both ran off but it was Jones’ #14 Brad Jones Racing VF Commodore which got stuck in the gravel trap as Jones suffered yet more heartbreak following his twin Townsville failures two rounds ago.

Fiore took the win in the Dunlop Super2 Series’ showpiece race but the result is provisional.

The West Australian faces a post-race investigation for an incident with Paul Dumbrell early on which saw the #88 Eggleston Motorsport VF Commodore fired into the wall and ultimately retired. 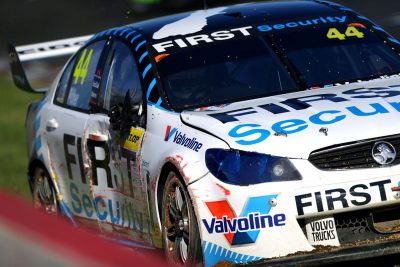 Alex Rullo (#62 Nissan Altima) helped MW Motorsport to a one-two while Chris Pither (#44 Garry Rogers Motorsport VF Commodore) took over the series lead with the final podium position despite hitting the tyre wall during the race.

Brodie Kostecki (#57 Kostecki Brothers Racing VF Commodore) made a good start from the outside of the front row to take a clear lead to Hell Corner, ahead of pole-sitter Jacobson, Pither, Fiore, Will Brown (#38 Eggleston Motorsport VF Commodore), and Dumbrell.

Jones and Rullo joined the train but they ran largely as you were until Lap 3, when Jacobson’s under brakes move on Brodie Kostecki at The Chase precipitated major drama.

While Jacobson pulled off the move, he ran well wide and took Brodie Kostecki with him, bottling up the leading group.

Brown and Dumbrell ran side-by-side up Mountain Straight as they contested fourth position.

Dumbrell got left high and over the crown of the road at Griffins, leaving him vulnerable to an advance from Fiore, who had been shuffled back to sixth.

The two came together on the run towards The Cutting, firing Car #88 into the outside wall.

Dumbrell somehow avoided a bigger hit as he skated up to The Cutting but the right-rear upright was broken and he had to retreat to the pits.

Jones was a couple of seconds back at the time having gone off at The Chase as Jacobson made his move.

Meanwhile, Bryce Fullwood ended up in the wall himself when he tried to stay wide of Mason Barbera (#99 Garry Rogers Motorsport VF Commodore) exiting The Chase but slid on the dirty part of the track.

With the #16 Matt Stone Racing VF Commodore coming to a rest inside of pit entry, the Safety Car was called, prompting Jacobson, Brown, Fiore, and others to pit.

Jake Kostecki had been making a move on the inside of Matt Chahda (#18 Matt Chahda Motorsport VF Commodore) when he pinched a brake and ran long, into his brother.

It led to the rest of the field filing into pit lane and put everyone back onto essentially the same strategy, albeit with jumbled up track position and slightly varying fuel loads.

Meanwhile, Brown had been into the pits after he hit the wall at McPhillamy Park.

Zane Goddard (#8 Brad Jones Racing VF Commodore) was next to come to grief when the race restarted on Lap 12, initially surviving a huge wiggle when he was hit in the rear by Shae Davies (#67 Paul Morris Motorsport FGX Falcon) on the run to The Cutting before glancing the wall at McPhillamy Park.

The former incident will also go to a post-race investigation.

Out in front, Jacobson put about 1.5s between he and Fiore in the next half-dozen laps as the two Nissans dropped the rest.

Jones moved ahead of Brodie Kostecki into sixth on Lap 18 when they were checked up due to simultaneous errors for Morcom and Smith at The Chase on the previous lap.

Rullo was the first to take his final pit stop at the end of Lap 18 and Pither followed a lap later, before swiping the tyre wall at Murray’s Corner on his out lap.

Jacobson pitted on Lap 21 with his lead trimmed back to around a second, before Fiore and Jones filed in a lap later.

Having taken four tyres in his first pit stop, Jones kept the same rubber and got out well ahead of the MWM cars, which took two tyres each.

Rullo ran an effective fourth and Smith (#21 VF Commodore), in the second of the BJR cars, slotted in behind when he pitted from the lead after Lap 28.

Jones officially took over the race lead at the end of Lap 33 when Dom Storey (#63 Eggleston Motorsport VF Commodore) pitted, just as Jacobson got under Fiore at The Chase.

A third Safety Car was called moments later when the last surviving Kostecki Brothers car came to rest at The Chase with broken right-front suspension.

Brodie Kostecki had hit Jordan Boys and ridden up on his left-rear corner having come in too hot for the stop.

To compound the misery, Boys ran off into the infield gravel trap when the tyre let go on the way into The Chase next time around, putting the #49 Image Racing VF Commodore sideways through the speed trap at 269km/h.

The race restarted with time enough to fit in just the 37th lap, and Jones took a comfortable margin out of Hell Corner.

However, Jacobson caught him across the top, and was right up behind the #14 Commodore when they arrived at The Chase.

Jacobson crossed the line in fourth with a damaged Altima, from Davies, Barbera, and Morcom.

Thomas Randle was eighth after the #5 Tickford FGX Falcon made four trips to the pits, one of which was a drive-through for a pit lane infringement after one of his two stops under Safety Cars.

Smith was fifth under the final Safety Car but nearly stuck Car #21 in the wall at The Tree, which saw Pither round him up, and he ultimately finished 11th.

Brown finished a lap down in 13th while Goddard was last classified at four laps down in 15th.

The final round of the season supports the Coates Hire Newcastle 500 on November 23-25.