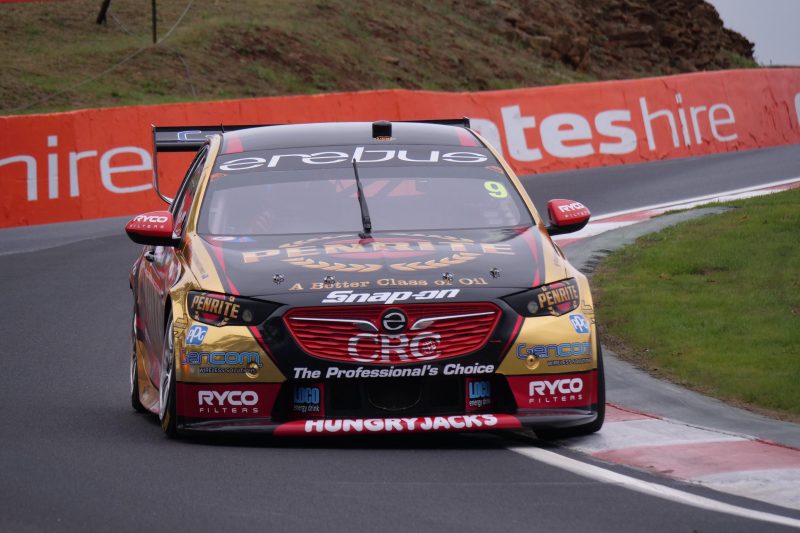 Luke Youlden was fastest in the first somewhat dry running of the Supercheap Auto Bathurst 1000 weekend but Dean Canto still came to grief in the conditions in Practice 4. 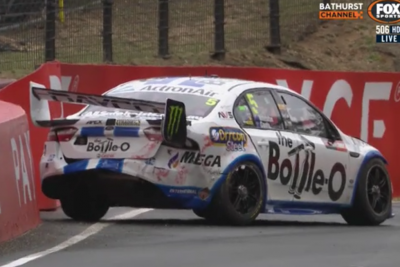 Canto brought a slightly premature end to the hour-long co-driver session when he stepped off the edge of the race line into the damp on the descent to Forrest’s Elbow.

The rear end of the #5 The Bottle-O FGX Falcon kicked out and made rearward contact with the wall at the start of the tyre-protected section which is only one-tyre deep.

“It’s just an interesting session; he’s actually on a slow down lap then and I’m not sure what happened, (he) got it wrong and ended up in the fence,” said primary driver Mark Winterbottom.

“Car looked like it had reasonable pace, we were trucking along okay and now the guys have got to try and repair it and get us out for the next one. Not ideal.

“It is what it is, you can’t blame him; tricky conditions.

“We’ll fix her up, get Dean’s confidence up. He was fast; we’ll go again later today.

“You deal with it, you roll with the punches. Bathurst will throw something at you; it’s thrown something at us early.

“We’ll fix it up and have a crack this afternoon.”

The crash brought out the red flags and snipped just over three minutes from the end of the session to lock in Erebus Motorsport’s Youlden (#9 Penrite ZB Commodore) as the fast man.

The 2017 race-winning co-driver clocked a 2:06.6471s in a long period as one of the pace-setters, 10 minutes before the red flag, more than 21 seconds faster than the first flying laps.

“It’s fair to say we had our struggles yesterday, but I think we probably got a handle of that this morning in the wet running.

“Car’s working really well, I probably didn’t expect that sort of margin either.

“The car was fast here last year; obviously we’ve got a similar set-up, we expected it to be quick, and now it’s up to Dave and I to actually put it together.”

Canto was in fact second-fastest by 0.4286s and Jack Perkins just over a tenth slower again in James Courtney’s #25 Boost Mobile ZB Commodore.

The hour-long session started with 22 cars on track, all on wets.

However, rain early in the session was patchy if falling at all in various parts of the track and it took James Moffat only three laps to knock off the fastest Thursday lap when he set a 2:23.9427s in Chaz Mostert’s #55 Supercheap Auto FGX Falcon.

Jason Bright went out on slicks around the 15-minute mark but brought the #18 Preston Hire ZB Commodore straight back into pit lane.

Dale Wood was the first of the day to set a lap time on dry-weather tyres, in Tim Blanchard’s #21 CoolDrive ZB Commodore, and went fastest with a 2:21.6445s on his second attempt on slick hoops.

From that point onwards, the benchmark time tumbled as the rest of the field transitioned from wet tyres and the race line all but dried out.

The conditions enticed Paul Dumbrell onto the circuit in the #1 Red Bull HRT ZB Commodore for the first time all weekend and he rounded out the top 10, one position ahead of Earl Bamber in the sister #97 ZB Commodore.

The third Triple Eight, the #888 Autobarn Lowndes ZB Commodore, was again blighted by power steering problems and Steven Richards propped up the timesheets.

Will Brown was only two positions higher in the #99 Erebus ZB Commodore which suffered a splitter failure at the end of Conrod Straight.

“Just at the end of the straight, braking into the kink, it just went,” said Brown.

“Bit disappointed we didn’t get the last bit of the session.

“Obviously the cars are good, Luke went first so he did a good job. (I’ll) Look at his data, jump in the Dunlop (Super2) car and see how we go.”